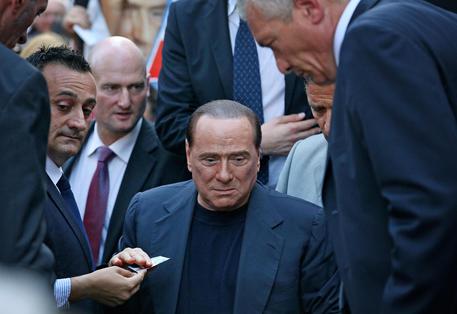 (ANSA) - Milan, April 11 - The prosecutor who asked a Milan court to let Silvio Berlusconi serve a 10-month sentence for tax fraud doing community service has warned that the ex-premier will be put under house arrest instead if he defames magistrates, reports said Friday.
The ruling on what kind of punishment the center-right leader will receive, which is expected within the next two weeks, will be key in determining what role Berlusconi will play in the coming year.
If he has to do house arrest, it would seriously curb his ability to lead his center-right opposition Forza Italia (FI) party ahead of May 25 European elections, a key test for it.
The choice is between house arrest or community service as the charismatic 77-year-old is too old to go to jail under standard Italian legal practice. The media magnate has repeatedly blasted judges in the past.
He says the tax-fraud ruling, which led to him being ejected from the Senate in November, is part of a two-decade campaign by left-wing elements in the judiciary to sweep him out of Italy's public life.
On Wednesday he complained that the left had used its "judicial arm" to stop him running in the European elections.
Lamanna reportedly told the court that, under standing legislation, community service "can be revoked" if the three-time premier defames "individual judges".
If Berlusconi is allowed to do community service, he would likely be free to be out and about from 8 am until 11 pm, judicial sources said Friday. The sources said that in "standard" cases in which a convict is ordered to serve a sentence doing community service, judges give few limits to freedom of movement and action and Berlusconi would probably only need to seek permission to leave the Lombardy region around Milan or neighboring regions. Berlusconi has already had his passport confiscated.
On Thursday Berlusconi's defence team asked the court for him to be able to campaign for FI for the European elections, which he cannot vote in as a result of the conviction. Berlusconi was sentenced to four years in prison in the tax-fraud case, but only 10 months of that remain to be served as the rest was covered by amnesties.