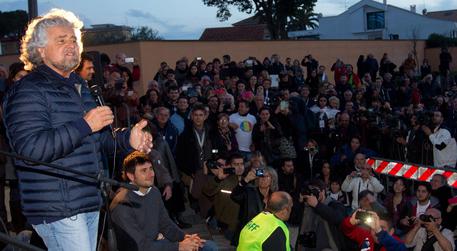 (see related) (ANSA) - Rome, April 10 - The center-left Democratic Party (PD) of Premier Matteo Renzi on Thursday rejected accusations by anti-establishment 5-Star Movement leader Beppe Grillo that five women heading PD lists in upcoming European elections had been chosen like "showgirls" in "the best Berlusconi tradition".
"Grillo is increasingly showing he is afraid of the PD for its choice to pick five women at the top of its party lists," said PD spokesman Lorenzo Guerini.
"His statements reveal what opinion he has of women, we have a different one and we increasingly want them to be protagonists," added Guerini.
Grillo has previously slammed Renzi's decision to put magistrate Caterina Chinnici and four MPs - Alessandra Moretti, Alessia Mosca, Simona Bonafe' and Pina Picerno - at the top of party candidates' lists for Italy's five constituencies in the May 25 European vote.
"Being a woman is not a value in and of itself," Grillo said, calling the five women "showgirls" who were being used "for marketing purposes".
Senator Isabella De Monte, a prominent party member and a candidate in the May vote, slammed the comic-turned-politician for "continuing to see Italy in black and white, with stereotypes belonging to a country which doesn't exist anymore".
"The pragmatism shown by Renzi has sent the M5S haywire," said De Monte of the anti-establishment party which according to the most recent polls sounding out preferences among Italian voters ranks second after leading party PD.
Meanwhile PD spokesman Guerini on Thursday also addressed tension within the PD sparked by Renzi's choice in fielding candidates.
"I don't think mistakes were made in drafting the lists, which were unanimously voted on by the board," he noted, stressing that the leadership "strongly agreed on candidates".
On Thursday the popular mayor of Bari and Puglia regional party coordinator, Michele Emiliano, described his candidacy as "superfluous" while another prominent PD member, Lampedusa Mayor Giusi Nicolini, said she would be pulling out of the list for the island's constituency because her candidature had lost "all significance".