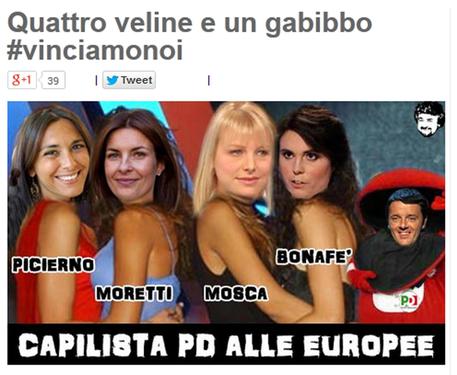 (ANSA) - Rome, April 10 - Comedian-turned-politician Beppe Grillo, leader of the anti-establishment 5-Star Movement (M5S), had to defend himself from fresh accusations of sexism on Thursday after suggesting the five women heading centre-left Democratic Party (PD) lists in the upcoming European Parliament elections had been chosen according to the "best Berlusconi tradition". "Being a woman is not a value in and of itself," wrote the controversial firebrand leader on his blog in relation to Wednesday's decision by PD Secretary and Premier Matteo Renzi to put four female MPs - Alessia Mosca, Alessandra Moretti, Simona Bonafé and Pina Picierno - and female magistrate Caterina Chinnici at the top of the lists of party candidates for Italy's five constituencies in the May 25 poll. The four MPs "are women used for marketing purposes according to the best Berlusconi tradition: four showgirls and Renzie as Gabibbo," continued Grillo in reference to the red mascot for Italy's Canale 5 television channel, part of the ex-premier's Mediaset empire. Grillo's comments generated immediate criticism from members of the PD. "Grillo insults women in the best misogynist and sexist tradition," said PD House whip Roberto Speranza.
"The people chosen by the PD to head the lists are members of parliament with a strong commitment to their base and to the institutions and are respected by citizens: they are in the House due to undisputed merits seen during this last year of parliament.
"Any inference is an offence to the entire party group that we categorically reject".
However the move by Renzi has also created tension within the PD.
On Thursday the popular mayor of Bari and Puglia regional party coordinator Michele Emiliano described his candidacy as "superfluous" in light of the decision.
"I agreed to head the list (in the Southern Italy constituency) because Renzi asked me to," said Emiliano. "Now a different choice has made my candidacy superflous," he continued.
And the mayor of Lampedusa, Giusi Nicolini, at the forefront of efforts to draw attention to the plight of migrants landing on the Sicilian island, said she would be withdrawing from the list for the island's constituency on grounds the party had acted according to "a logic that deprived her candidacy of all significance".