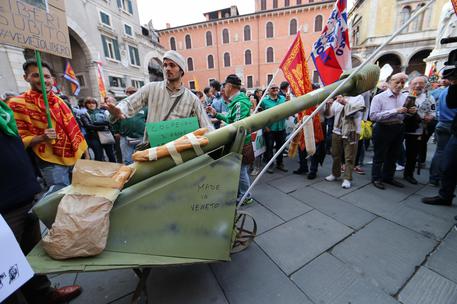 (ANSA) - Venice, April 7 - The self-proclaimed "Veneto Government" headed by Venetian separatist Albert Gardin on Monday sent a letter to the Italian Premier Matteo Renzi demanding immediate "delivery" of a "prisoner of war" into the hands of "Veneto authorities".
Arrested Veneto separatist Luigi Faccia on Friday declared himself a "prisoner of war" and later announced his citizenship as "Venetian" when he appeared before a preliminary hearing judge in a Vicenza prison.
Faccia is one of 24 Veneto separatists arrested last Wednesday and suspected of crimes that include criminal association for terrorism and subversion of the democratic order.
Gardin wrote that "the Veneto Government feels directly called into question".
"In fact, the resistance activity expressed...clearly expresses a patriotic Veneto commitment to tackle the 'Italian' occupation of the Venetian Republic. It is the duty of the Veneto Government to take on the defence of patriots that act honourably in the defence of the Venetian Republic," Gardin said.
"Luigi Faccia, calling himself 'prisoner of war', declares himself citizen of the Venetian Republic and not an Italian citizen. A distinction that must be received, understood and respected by Italian authorities," the letter continued.
According to defense lawyers Andrea Arman and Alessandro Zagonel, Faccia read a statement to the judge saying: "As head of the Venetian Liberation, servant of the Most Serene Republic of Venice, I declare myself a prisoner of war".
Also included in last week's round up of Veneto secessionists was former MP Franco Rocchetta, the founder of the Liga Veneta (Veneto League) separatist party.
The Liga Veneta was a founding member of Northern League, a federation of regionalist parties which has recently upped its drive for greater autonomy for wealthy northern regions and started calling for outright independence again, the original demand of its early years.