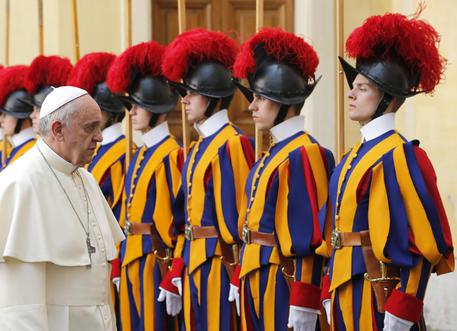 (ANSA) - Vatican City, April 4 - Pope Francis says that his concern for the poor does not mean he is a communist, but is instead an example of behavior consistent with the teachings in the Gospel. His comments came at the same time as Friday's announcement from the Vatican that the pope had ordered the distribution of thousands of free copies of pocket-sized New Testaments during Sunday's weekly Angelus.
They also came as Francis prepared for a private, informal meeting inside the Vatican with Premier Matteo Renzi and his family - the first between Renzi, who became premier in February, and the pope.
The two leaders were not expected to touch on policy issues.
In his interview with a group of Flemish-speaking youths from Belgium, who taped the conversation as part of a project and made it public Thursday, Francis also spoke of his happiness and fears as well as living in his faith.
For Francis, that has meant living simply and thinking constantly of the under-privileged and marginalized in society - a theme that the pope has returned to frequently in his comments since taking office.
"This is the heart of the Gospel," Francis said of the poor.
"I am a believer in God and Jesus Christ, for me, the heart of the Gospel is in the poor," added the pope. "I heard two months ago that someone said, 'With all this talk of the poor, this pope is a communist!'," Francis said.
"No - this is a banner of the Gospel, poverty without ideology, the poor are at the centre of Jesus's Gospel," Francis added during the 30-minute interview posted on Belgian website deredactie.be, as a communication project. During his interview with the Belgian youths, Francis said he had problems like anyone else, but still lived in contentment. "I am absolutely happy," Francis said.
"I have a certain inner peace...a happiness that comes with age," and remains despite whatever problems crop up, he added.
The pope added that it is normal to feel fear and people should not be concerned when they feel afraid.
"In the Gospel, Jesus repeated many times: 'Do not be afraid'," said Francis.
"He says it many times, because he knows that fear is a normal thing," he added.
When asked what he feared, the pope replied: "If I'm afraid of something, it is only of myself". http://popefrancisnewsapp.com/