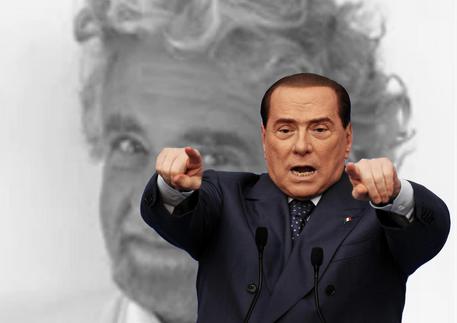 (ANSA) - Rome, April 2 - While Premier Matteo Renzi was in Brussels Wednesday ahead of volatile European Parliament elections next month, opposition leaders at home were gearing up for an attack on his center-left majority. "It's easy for people to vote for Renzi. If you are not intelligent, honest and democratic, vote for him," said comic Beppe Grillo.
The leader of the anti-establishment 5-Star Movement (M5S) was launching a campaign tour ahead of May 25's EP elections in which Euroskeptic parties such as his are expected to do well. The first stop was in the southern city of Catania Wednesday, one day after he published a list of the party's first 20 candidates on his popular blog. Second only to Renzi's Democratic Party (PD) in terms of popular support, the M5S is a force to be reckoned with. Meanwhile, the opposition Forza Italia party of three-time premier Silvio Berlusconi was moving chess pieces of its own.
On Wednesday it rolled out its logo for May's European elections featuring the name "Berlusconi", even though the ex-premier will not be able to stand as a candidate. The 77-year-old billionaire is ineligible as he was banned from public office after the Supreme Court upheld a tax-fraud sentence against him last year, his first definitive conviction in two decades of legal battles. The media magnate, who was also ejected from parliament following the conviction, said the ruling was part of a campaign by left-wing elements in the judiciary who want to sweep him out of Italy's public life. But the Berlusconi trademark remains strong, at least among the party faithful. FI presented the Berlusconi logo along with its slogan for the May 25 EP election: "Più Italia in Europa. Meno Europa in Italia" (More Italy in Europe. Less Europe in Italy). The media magnate has been highly critical of austerity the European Union imposed on countries as its main response to the eurozone debt crisis. But Grillo is not to be outdone. On Wednesday he upped his call for Italy to have a referendum on whether the country should continue to have the euro as its currency and stay in the European Union.
Writing on his blog, the comic-turned-politician said Italians must be given the final word on whether the euro is still "feasible and legitimate". "Italy lost its monetary sovereignty without consulting its citizens," he added. But after a day of EU summits in the European capital, Renzi appeared to have reasons for optimism. As the markets closed, the 39-year-old premier reveled in the spread narrowing "to its lowest point since 2011," signalling improved investor faith in Italy. The spread between the Italian BTP State bond and its ultra-safe German equivalent was below the 170-basis-points mark, 169, for the first time since the start of June 2011.