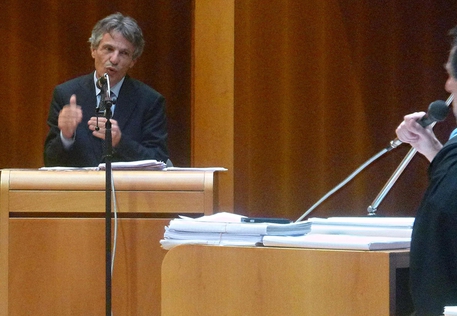 (ANSA) - Salerno, April 1 - Prosecutors in the southern city of Salerno on Tuesday sought the indictment of the former president of Monte dei Paschi di Siena bank, Giuseppe Mussari; ex-Siena mayor Franco Ceccuzzi; the former chairman of the Lower House finance committee Paolo Del Mese; and 11 board members of Banca della Campania bank in connection with the bankruptcy of Antonio Amato pasta makers.
They must answer allegations of colluding in bankruptcy fraud in the February 2010 default of the family-owned pasta-maker. Founded in 1958, it employed 140 people at the time it went under.
The company has since been auctioned off to Di Martino pasta makers for an estimated 13 million euros, saving employee jobs.
Preliminary hearings begin May 15, court sources said.
The 14 defendants are liable for fraudulent bankruptcy as part of the investigation of the crash of pasta Amato. The suspects will appear before the preliminary hearing judge of the Court of Salerno, Vincenzo Di Florio, on 15 May.