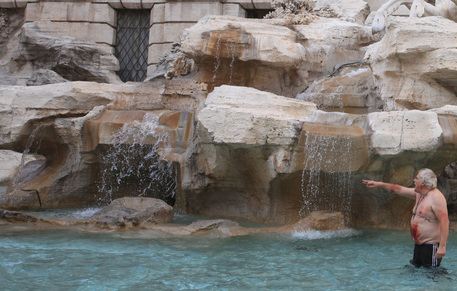 (ANSA) - Rome, December 18 - A man who became famous for raiding the Trevi Fountain's coins for more than 30 years was found dead in his Rome home on Wednesday. Roberto Cercelletta, 62, was better known as D'Artagnan for the long, sword-like magnet he used to fish coins thrown by tourists into the waters. He gained worldwide news coverage with his tricks including a front-page slot on the New York Times. In one week at the height of the tourist season, he was reported to have scooped out an impressive 22 kilos of coins from the fountain in just fifteen minutes. As recently as May police fished him out of the fountain after he climbed up a waterfall and deliberately cut his stomach in protest against his unemployment. The Trevi Fountain, designed to replace an older fountain dating back to the 1450s, was created by Gian Lorenzo Bernini and Pietro da Cortona in the 17th-century, but was not completed until a century later, around 1751 when Nicola Salvi was commissioned to finish the work.