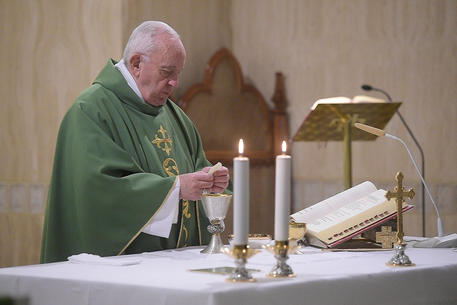 (ANSA) - Rome, January 16 - The case of emeritus pope Benedict XVI apparently coming out against Pope Francis' possible ordination of married priests in the Amazon and other outlying regions is closed, Francis told journalist Eugenio Scalfari in an interview with La Repubblica daily Thursday.
Benedict's staunch defence of priestly celibacy in a book he apparently co-authored with a high-ranking conservative cleric caused a row in Church circles, with the German ex-pope accused of undermining his successor.
The controversial book by Cardinal Robert Sarah about priestly celibacy came out in France Wednesday with Benedict's name on it as co-author.
Benedict requested his name be removed from the book after it caused a furore for saying that celibacy is of "great significance" as it ensures clergymen can focus on their job.
Pope Francis is considering a proposal to allow married men to be ordained in the Amazon region. ANSA could testify that the book, From the Depth of Our Hearts, was on the shelves of France's biggest book chain, FNAC, on Wednesday.
Another book trader said that the second edition will come out differently, stating that it was produced "with the collaboration of Benedict XVI".
Benedict XVI's personal secretary Georg Gänswein told ANSA on Tuesday that "the pope emeritus knew that the cardinal (Sarah) was preparing a book and he sent him a text on the priesthood authorizing him to use it as he wanted. "But he did not approve a project for a co-authored book and he had not seen or authorized the cover".
Benedict became the first pope to resign in almost 600 years when he stepped down in 2013.
At the time the 92-year-old German said he would remain "hidden from the world" during his retirement.
In the La Repubblica interview Thursday, Francis also told Scalfari that "the Church embraces millions of people, and there is always someone contrary".
Scalfari, who founded liberal daily La Repubblica in the mid 1970s, is considered a dean of Italian journalism.
An atheist, he has recently had several interviews with Francis in which he supports the Argentine pope's progressive-minded and green-friedly moves.