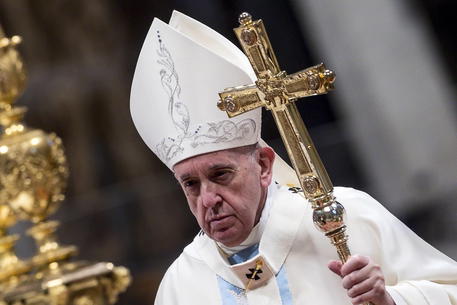 (ANSA) - Vatican City, January 3 - Pope Francis urged medical operators worldwide not to "give in" to euthanasia and assisted suicide.
In a message for the 28th World Day of the Sick on February 11, Francis said "dear health operators, every diagnostic, preventive, therapeutic, research, care and rehabilitation intervention is aimed at the sick person, where the noun 'person' always comes before the adjective 'sick'.
"Therefore, may your action always be aimed at the dignity and life of the person, without any yielding to acts of an euthanasia nature, of assisted suicide or suppression of life, not even when the state of the illness is irreversible." Assisted suicide has come to the fore in Italy recently after a Milan court acquitted right-to-die activist Marco Cappato of helping blind and tetraplegic Italian former disk jockey, Dj Fabo, commit assisted suicide in a Swiss clinic.
The pope went on to say that conscientious objection in these by medical professionals who refuse to assist these cases was a "yes to life".
"In certain cases, conscientious objection is for you the necessary choice to remain coherent with this 'yes' to life and the person," he told the health operators in his World Sick Day message.
"In any case, your professionality,animated by Christian charity, will be the best service for the true human right, that is the right to life.
"When you cannot cure, you can always treat with gestures and procedures that give comfort and relief to the sick". On December 23 a Milan court acquitted Cappato of charges of assisting suicide after he helped Fabiano Antoniani, better known as DJ Fabo, take his own life at a Swiss clinic in 2017.
The case returned to Milan after the Constitutional Court ruled in September that assisting suicide is lawful in some cases when asked for an opinion on it.
Cappato, a Radical party member, said "I acted for freedom of choice and for the right to individual self-determination".
He was acquitted with the full formula of "a crime was not committed," judicial sources said.
The sentence was greeted with a long round of applause from the court.
DJ Fabo's former girlfriend, Valeria Imbrugno, said he would have celebrated the verdict.
"What I can say is that Fabiano today, together with me, would have celebrated because it is a battle he believed in from the start," she said.
"It is a battle for the freedom of all".
The sentence was hailed by Italian right to die groups and progressive politicians.
The head of the right to die Luca Coscioni Association, Filomena Gallo, said "today's acquittal of Marco Cappato gives freedom to freedom." She said that "the road that we started out on was the right one, from the start".
Gallo also called for the Italian political world to now take action on the basis of the sentence and legislate on end of life issues.
"Politics is at a standstill on these issues and there has not been any law on end of life issues and euthanasia since 2013," she said.
The Coscioni association's lawyer, Massimo Rossi, said the verdict represented a "step forward towards civilisation, not only juridical".
The Italian Green Party said "Cappato's acquittal is an act of civilisation".
Francesca Businarolo of the ruling anti-establishment 5-Star Movement (M5S), who is the chair of the Lower House justice committee, said she hoped that "the principles established by the sentence will soon be enshrined in our legal system, and we are working to ensure that".
Civil Service Minister Fabiana Dadoine said "parliament must overcome its misgivings and act to raise the level of civilisation of our country".
The prosecutor in the case, Tiziana Siciliano, called for "lawmakers to give a law to others that are hoping".
Conservative MPs said the law "sets a dangerous precedent" and recalled that the Catholic Church is and has always been against euthanasia and assisting suicide.