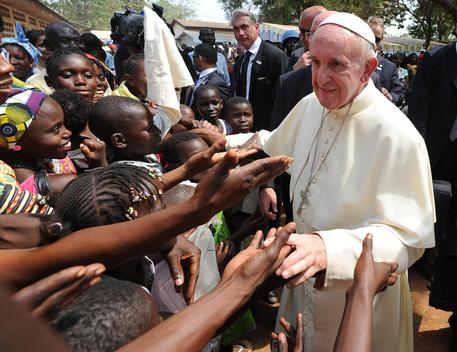 (ANSA) - Rome, November 30 - Pope Francis returned from his apostolic mission to Africa on Monday evening, after launching an appeal for Muslims and Christians to unite against violence in the name of God.
"Let us remain united to put an end to every action that disfigures the face of God (...) and is aimed at defending vested interests (...) to the detriment of the common good," the pope said at Koundoukou mosque in the capital of the Central African Republic (CAR) on Monday, the last day of his trip to Africa. CAR has torn apart by violence between armed Muslim and Christian factions since the end of 2012, with humanitarian organizations documenting civilian massacres, rape and torture committed by both sides.
"Together, let us say no to hatred, to revenge and to violence, particularly that violence which is perpetrated in the name of a religion or of God himself," he said. On Sunday, he opened the Holy Door in the cathedral of the country's capital Bangui in an early start to the Jubilee Holy Year of Mercy in Africa. "Bangui becomes the spiritual capital of the world," Pope Francis said.
His visit to war-torn CAR was considered high-risk and accompanied by extra security measures in addition to his usual Vatican security entourage, including UN peacekeepers with armoured cars and heavy weapons, and even CAR soldiers armed with rocket launchers. The Jubilee Year will officially commence in Vatican City on December 8, when the pontiff will open the Holy Door at St.
Peter's Cathedral.
This was the pope's first trip to the African continent, a historic visit which lasted six days and began in Kenya. There, Pope Francis visited the UN headquarters in Nairobi, and after touring a slum on the city's outskirts, he railed against corruption during a meeting with young people at the capital's stadium in Kasarani. "Don't accept this sugar called corruption," he told the young people gathered there. "Corruption takes away joy. Corrupt people do not live in peace. Corruption is not a path of life.
It's a path of death". The Argentine pontiff also spent two days in Uganda, where, following in the footsteps of Pope Paul VI, he visited shrines in memory of martyred Christians at Munyonyo and Namugongo. Pope Francis's plane left Bangui around 12:30 p.m. on Monday and landed at Rome's Ciampino airport at 6:30 p.m. local time.