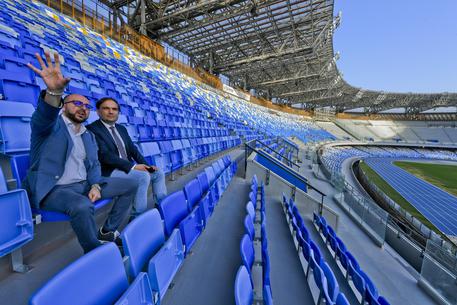 (ANSA) - Naples, June 21 - The Naples San Paolo stadium, 60 years after its inauguration in 1959, will now have two large screens provided by the Microplus company, each measuring a massive 120 square meters.
The screens were installed for the 2019 Universiade thanks to funding from the Campania regional government. With the installation of the two video walls, the replacement of all the seats, the renovated audio facilities and lights, as well as the new athletic track and changing rooms, the Fuorigrotta facilities - a statement says - "is now avantgarde, one of the most modern and functional stadiums of Italy". On Friday afternoon, a trial run was done on the video wall placed on the 'Tribuna Nisida' by technicians from the Deltronics company.
Over the coming days the second screen, installed in the 'Distinti' section, will also be turned on and tested.
The opening ceremony of the Universiade will be projected on both screens on July 3 and then the track and field events from July 8 to July 13. The large screens will remain available for the stadium to use for Naples football matches and the next championship.
Universiade Special Commissioner Gianluca Basile expressed his satisfaction and thanked Universiade Regional Agency (ARU) technicians Salvatore Ferrandino, who was in charge of the technological aspect of the installation, and Filomena Smiraglia, the architect in charge of San Paolo stadium works.