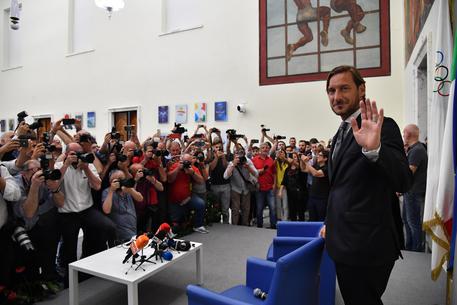 (ANSA) - Rome, June 17 - AS Roma legend Francesco Totti announced Monday that he was resigning from his position as an executive for the Serie A club. "I have announced my resignation as a Roma director in an email to the club's CEO today," Totti told a press conference at the offices of the Italian Olympic Committee (CONI). "I hoped this day would never come".
Totti, 42, took up the executive role after ending his glorious playing career two years ago.
The former Italy forward and 2006 World Cup winner, a born-and-bred Roman, is worshipped by Roma fans after only ever playing for the club he supported as a child. "It's not my fault," former Roma captain Totti said.
"I say it is not my fault because I was never involved in the sporting project.
"That might have been OK in the first year, but then I clarified in my mind what I had to do".