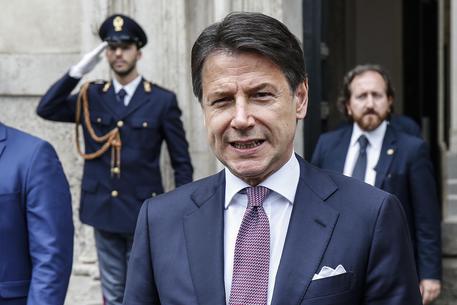 (ANSA) - Rome, July 19 - Premier Giuseppe Conte said Friday he had not received any request for a reshuffle from populist government partners Luigi di Maio of the anti-establishment 5-Star Movement (M5S) or Matteo Salvini of the nationalist League, his two deputy premiers.
There has been mounting speculation that a reshuffle might be needed to ease the tension between Di Maio and Salvini over their differing votes on new European Commission chief Ursula von der Leyen and a row over alleged Russian funding for the League, as well as Salvini's specific criticism of M5S ministers.
"After the pause of the European electoral contest none of the ministers ever suggested to me the possibility of a reshuffle," Conte said.
Referring to Salvini's criticism of Transport Minister Danilo Tonnielli and Defence Minister Elisabetta Trenta, Conte said "I defend my ministers against anyone. If someone has some criticism to make let him do so in an institutional forum".
Salvini was not at Friday's cabinet meeting.
"I'm not just getting by; I'm working on the autonomy reform and tax reform," Conte went on.
During the meeting on autonomy at the premier's office, a League measure to hire teachers on a regional basis, opposed by the M5S, was struck down.
Lombardy, Veneto and Emilia Romagna are seeking greater autonomy from the rest of Italy and the move is strongly backed by the League while the M5S has voiced concerns over Italian unity.
Veneto Governor Luca Zaia said he was "speechless" at the "umpteenth postponement" of approval for the autonomy plans.