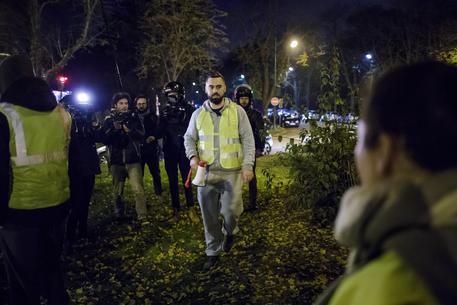 (ANSA) - Paris, January 9 - Eric Drouet, one of the leaders of the Yellow Vest protest movement in France, said Wednesday that he was ready to take up an invitation to meet Italian Deputy Premier Luigi Di Maio for talks. The lorry driver, the leader of the more militant wing of the protest movement, told ANSA that a meeting with Labour and Industry Minister Di Maio "absolutely feasible". He said he was "always very happy about the various expressions of support for the Yellow Vests. It's important support for us". There has been tension between Paris and Rome after Di Maio said this week that his 5-Star Movement (M5S) was ready to offer support to the Yellow Vests.
Fellow Deputy Premier, Interior Minister and League leader Matteo Salvini also expressed support for the protestors. In an interview published by daily newspaper Il Fatto Guotidiano on Wednesday, Di Maio said he would meet Yellow Vest representatives soon and wanted to form a group for this year's European elections.
"Macron can work on alliances in Europe, but if I do so, am I committing lese-majeste?," he said.
In contrast to Drouet, the leader of the more moderate wing of the Yellow Vests, Jacline Mouraud, said on Tuesday that Di Maio was meddling in French domestic affairs.