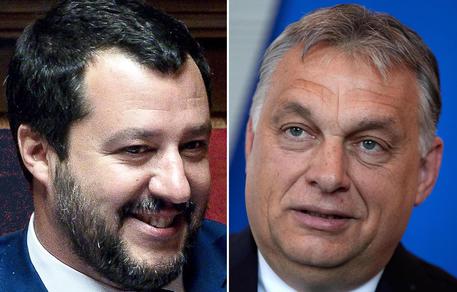 (ANSA) - Milan, August 28 - Hungarian Premier Viktor Orban said Tuesday Interior Minister Matteo Salvini "is my hero" ahead of a meeting between the two in Milan.
"I'd like to meet him personally. he is my hero," said Orban as he left a Milan restaurant where he had lunch ahead of the meeting.
"He is a companion of destiny of mine, I'm very curious to know his personality.
"I'm a great admirer and I have some experiences that I could perhaps share with him. I have that feeling".
Orban said Tuesday he had asked his friend, former Italian premier Silvio Berlusconi, for permission to meet Salvini. "Do you support the fact that I should meet Salvini?" Orban said he had asked Berlusconi.
"'Certainly', he replied to me," said the Hungarian premier.
Salvini is set to meet Orban on the issue of migrants, where they both favour a hardline stance.
Orban has put off border walls against migrants while Salvini has refused to allow some ships to offload rescued migrants in Italy.
Politico said Tuesday "Orban and Salvini, master and pupil of EU populism, the Milan meeting worries Brussels and Rome".
Salvini said ahead of the Orban meeting that "now the left only exists to insult me, to defend the EU of the bankers and immigration without limits.
"PS in Hungary unemployment is under 5%, the flat tax for businesses is at 9% and for people at 15%, immigration is under control and the economy is growing by 4%.
Premier Giuseppe Conte, meanwhile, met Czech Premier Andrey Babis, another member of the Visegrad Group, in Rome.
The Visegrad Group, which is generally Euroskeptic and rejects EU solidarity on migrants, consists of Hungary, Poland, Czech Republic and Slovakia, led by populist leaders.
Salvini is leader of the anti-migrant Euroskeptic League party, which has been in government with the anti-establishment 5-Star Movement (M5S) for three months, as western Europe's first populist government.