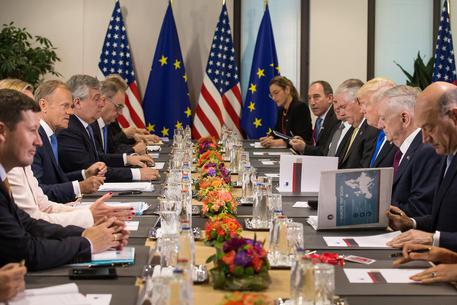 (ANSA) - Brussels, May 25 - European Parliament President Antonio Tajani said that Thursday's meetings between EU officials and United States President Donald Trump had been productive. "It was a positive encounter which, according to me, eased the concerns in Europe that Trump wanted to be distant from us," Tajani said. "It is not the (same) Trump as in the election campaign that we saw". European Council President Donald Tusk said some progress was made.
"We discussed foreign policy, security, climate and trade relations," Tusk said after he and European Commission President Jean-Claude Juncker met Trump.
"My feeling is that we agreed on many areas, first and foremost on counter-terrorism.
"But some issues remain open like climate and trade and I am not 100% sure that we can say today that we have a common position about Russia, although when it comes to the conflict in Ukraine it seems that we were on the same lines".