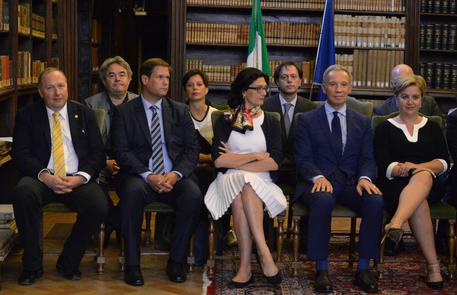 (ANSA) - Rome, May 25 - One Austrian and four Italians were among the five museum chiefs scrubbed by a controversial sentence from the Lazio regional administrative court because the tender was open to non-Italians, interviews took place behind closed doors, and other technicalities.
Here are pen-pix of the five.
1) PETER ASSMAN (MANTUA DUCAL PALACE): 63, art historian.
Austrian, studied and worked in Florence, at the Deutsches Kunsthistorisches Institut. From 2002 to 2012 president of the Austrian museum association. Directed Obersterreichischen Landenmuseen di Linz and Angerlehner Museum in Thalheim bei Wels. Teaches at Johannes Kepler Universitat in Linz and University of Vienna. Since 2011 on scientific committee of Buonconsiglio Castle Museum in Trento.
2) MARTINA BAGNOLI (GALLERIA ESTENSE IN MODENA): 53 art historian. Born in Bolzano, graduated from Cambridge in art history and got a phD cum laude from the Johns Hopkins University of Baltimore in 1999. From 2003 at Baltimore's Walters Art Museum. Also worked in other US museums including National Gallery of Art in Washington.
3) EVA DEGLI INNOCENTI (MUSEO ARCHEOLOGICO NAZIONALE IN TARANTO): 41, archaeologist. Born in Pistoia, graduated from Pisa, then got European research doctorate from Siena University. Was a director at the Coriosolis museum of the Plancot Ple'lan community in Brittany. From 1995 to 2008 led digs in Italy and Tunisia.
4) PAOLO GIULIERINI (MUSEO ARCHEOLOGICO NAZIONALE OF NAPLES): 48, archaeologist. Born in Cortona, graduated in archeaology with specialisation in Etruscanology from Florence University.
Director of the Museum of the Etruscan Academy and city of Cortona, where he has worked since 2001, and has had several other museum posts.
5) CARMELO MALACRINO (MUSEO ARCHEOLOGICO NAZIONALE OF REGGIO CALABRIA): 46, archaeologist and architect. Born in Catanzaro, graduated in architecture in Florence and specialised in Archaeology and Ancient Architecture at Athens. From 2010 researcher in history of architecture at the Università Mediterranea of Reggio Calabria. In 2005 got doctorate in history of architecture in Venice.