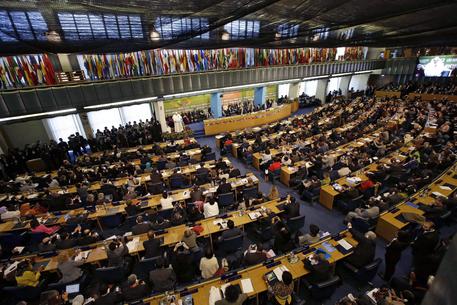 (ANSA) - Rome, June 5 - Italian President Sergio Mattarella will be the keynote speaker at the 39th biannual conference of the UN Food and Agriculture Organization (FAO) in Rome on Saturday.
Fourteen heads of state are expected to attend the week-long event, along with 197 members of the organization.
The conference will define the organization's 2016-2017 budget and political direction for carrying out its mission of eliminating world hunger, food insecurity and malnutrition.
It will also elect a director-general for the next four years.
Director-General Jose Graziano da Silva is expected to be reconfirmed as the sole candidate.
Chilean President Michelle Bachelet will speak at Saturday's opening ceremony, followed by a lecture on food security from former Brazilian president Luiz Ignacio Lula da Silva. Argentinian President Cristina Kirchner is scheduled to speak on Monday.
On Sunday, 15 countries will receive an award for reaching the Millennium Development Goal 1 (MDG1) target on reducing hunger. Of these, six will also be honored for reaching the more stringent World Food Summit goal of 1996.
On Friday June 11, Queen Letizia of Spain will be nominated FAO Special Ambassador for Nutrition.