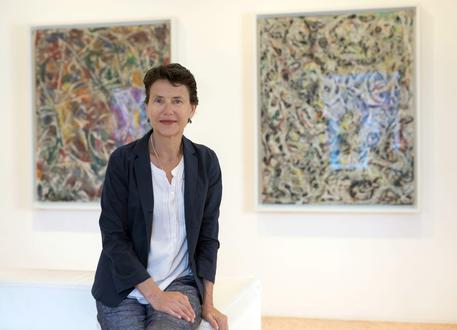 (ANSA) - Venice, April 26 - The eyes of Peggy Guggenheim's granddaughter Karole Vail light up at the thought of artichokes.
"I could live on them," she said about the spring delicacies of Sant'Erasmo island.
The highly appreciative gaze of Vail, director of the Peggy Guggenheim collection in Venice, falls on a large painting by Tancredi, an artist who was born in Belluno but trained in Venice and was dear to her grandmother. In a photo from the 1960s, Peggy is sitting in an armchair in Palazzo Venier dei Leoni on the Grand Canal with the work behind her, her beloved dogs in her arms.
Vail knows that Venice and the Guggenheim are inextricably linked. "Peggy lived here for 30 years," she noted, "and her influence was significant. She was the one who chose to remain and to generously open up her collection to the city." Almost a year ago, her granddaughter returned to the lagoon, where she spent her childhood, and became the second director of the foundation after Philip Rylands, who held the position for 37 years. "It's lovely to get lost here," she said. The past few months have seen her strengthen relations with other institutions in Venice, and enjoy the fact that the collection managed to draw over 427,000 visitors and bring in innovations in the arrangement of the paintings, such as with the 11 Jackson Pollack works all together. She smiled in front of Surrealist paintings that used to scare her when she was a child, noting that "it's too bad I can't sleep here anymore!" and said that the choice to give up New York for Venice was "the right choice".
It was just after WWII that the destinies of the city on the lagoon and the Guggenheims crossed and Peggy landed, loaded with works that had never before been seen to present in the Greek pavilion of the 1948 Venice Biennale. Starting on May 25, that moment in time will be brought to life with an exhibition "that aims to pay homage to the Biennale and Peggy, and her arrival in Venice".
It will be a surprise, with the return to the lagoon of paintings that had taken other paths, such as works by Jean Hélion and Friedrich Vordemberge-Gildewart, donated to the Museum of Tel Aviv.
The exhibition, which is being held in parallel with one on Josef Albers and his Mexico trips, will act as a path-breaker for several initiatives being planned for 2019, the 40th anniversary of Peggy's death. "Our activities," her granddaughter said, "are in reality always linked to her name and work, but this will be a chance to deepen awareness and heighten visibility of her collection." The permanent works of a donation received in 2012 will be temporarily moved to the section for temporary exhibitions and the main part of the building will show a wider range of the works collected by Peggy until 1945.
For a period, she purchased one every day including works by Brancusi, Léger and De Chirico, and Cubism, Surrealism and Abstract art are all represented. At the end of the year, the second part of the homage to the patron of the arts will focus on works purchased after her arrival in the lagoon, with Tancredi, Vedova, Santomaso and kinetic art. Between the two, during the summer, there will be a show on Jean Arp, the first artist to be part of the collection. The exhibitions will serve as a 'stage' for the choices of a collector who wasn't afraid to risk and focused on talent and not on the market. All in all, the shows will remember a woman who gave so much to Venice and most likely received a great deal from that city where, in the eyes of many, contemporary art has found one of its true homes.