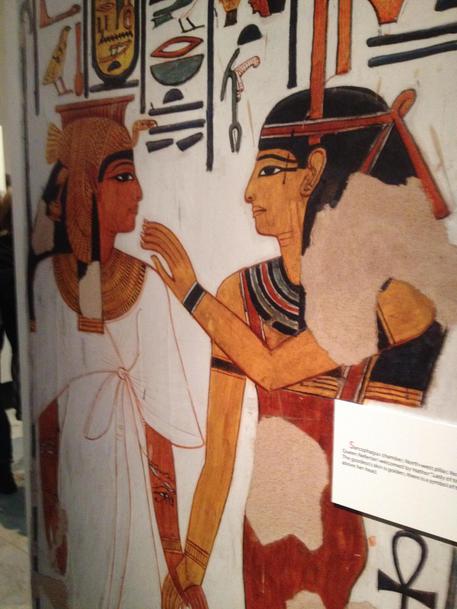 (ANSA) - Rome, December 6 - The mummy of Ancient Egyptian Queen Nefertari has been identified in Turin's Egyptian Museum, ANSA sources said Tuesday.
A group of international archaeologists led by York University in the UK believes that the legs of the favourite wife of Pharaoh Ramesses II are preserved in the famed museum in the northwestern Italian city.
The study has been published in the Plos One journal. Nefertari, also known as Nefertari Meritmut, was an Egyptian queen and the first of the Great Royal Wives (or principal wives) of Ramesses the Great. Nefertari means 'beautiful companion' and Meritmut means 'Beloved of [the goddess] Mut'. She is one of the best known Egyptian queens, next to Cleopatra, Nefertiti and Hatshepsut.
The legs of the legendary queen are preserved in a glass case, the sources said.
In order to identify her remains, chemical, anthropological, genetic and carbon-dating tests were carried out.
According to the study, the mummified legs belong to an adult woman of about 40 years of age.
Furthermore, the materials used to mummify the legs are in line with the methods used for mummification in the 13th century BC, the study said. Ramesses II's favourite wife was given a splendid tomb in the Valley of the Queens.
Even though it was sacked in ancient times, the tomb, discovered in 1904 by Italian archaeologist Ernesto Schiaparelli, still contained various remains that were sent to Turin's Egyptian Museum, including parts of a pair of mummified legs (tibias and femurs).
But the study that discovered whether those legs could actually all that remained of one of Ancient Egypt's most celebrated queens was only undertaken in relatively recent times.
Neferati, who died at about age 40 in Ca 1255 BC, was highly educated and able to both read and write hieroglyphs, a very rare skill at the time. She used these skills in her diplomatic work, corresponding with other prominent royalties of the time. Her lavishly decorated tomb, QV66, is one of the largest and most spectacular in the Valley of the Queens. Ramesses also constructed a temple for her at Abu Simbel next to his colossal monument there.