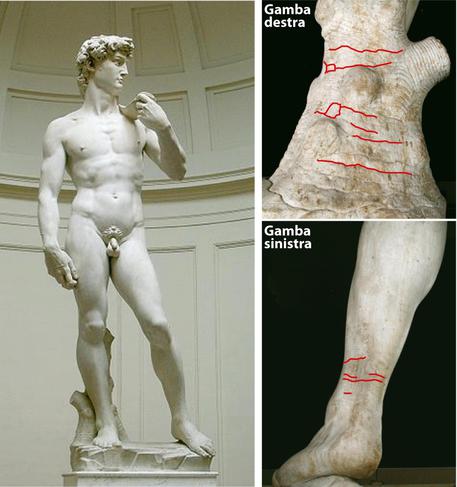 (ANSA) - Florence, April 30 - Michelangelo's statue of David risks toppling under its own weight, researchers in Florence warned on Wednesday. The National Research Council (CNR) and the University of Florence sounded the alarm after performing tests on 10cm plaster replicas of the statue inside a centrifuge, exposing them to pressures stronger than the force of gravity. Focus was centered on a series of micro-fractures on the legs, whose ankles are allegedly too thin to support its 5,572 kilograms safely.
"Micro-fractures are visible in the left ankle and the carved tree stump (that bears part of the statue's weight), threatening the stability of the sculpture," said a CNR statement, which was published in the Journal of Cultural Heritage. Experts have long warned that the statue's weight, pose and poor-quality marble put it at risk in the event of an earthquake or even successive rumblings from maintenance at its home in the Accademia Gallery or road construction outside. Florence has a recorded history of 127 minor quakes, none of which topped five on the Richter scale.
In the past it has been suggested the the David should be moved to an earthquake-proof underground room to protect it from seismic activity.
There has even been a bid to move it to a purpose-built site outside the city centre to relieve traffic congestion.
Visible cracks in the left ankle and in the tree stump have shown a tendency to reappear after being covered up with plaster.
The cracks in the statue's ankles are believed to have developed because it spent over a century leaning forward dangerously as it stood in the main city square.
In 1873, after 469 years in the elements during which time its surface became rough and pockmarked, the David was taken out of the elements and put in the Galleria dell'Accademia.
A copy was erected on its original site - where some of Florence's visitors take it for the real thing.
The statue was conceived by the Florentine governors who commissioned it as an emblem of the city's pride and its ability, despite its small size, to defend itself against giants.
Michelangelo chiselled the marble for three years and eventually created what came to represent the Renaissance ideal of manhood. It was unveiled in Piazza della Signoria in 1504.