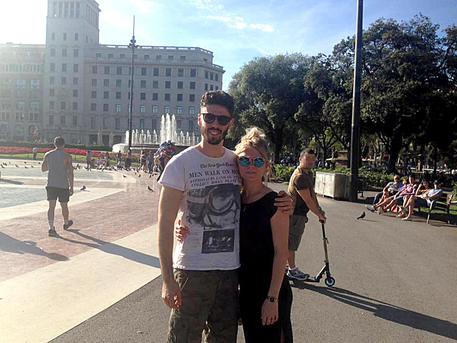 (ANSA) - Rome, January 24 - The Ukrainian girlfriend of a 24-year-old Roman personal trainer gunned down in Rome in October was among six people sent to immediate trial on Friday.
Anastasia Klymenyk, also 24, was sent to trial in the part of the Luca Sacchi murder case relating to the purchase of a large amount of drugs, a deal which went wrong and resulted in what prosecutors say was a premeditated killing.
Sacchi's boyhood friend Giovanni Princi, the alleged brains behind the deal, was also indicted, as were the pair who attacked Sacchi, alleged San Basilio area pushers Valerio Del Grosso and Paolo Pirino.
Sacchi was allegedly killed by a single shot to the back of the neck by Del Grosso on October 23.
Another man, Marcello De Propris, was charged with complicity in murder for allegedly supplying Del Grosso with the gun, as well as his father Armando, charged with possessing narcotics.
Klymenk told police she had been assaulted along with Sacchi and alleged thieves had taken her rucksack.
She denied that 15 kg of drugs found in the backpack belonged to her.
But police believe she was part of the alleged drug deal that went wrong.
The trial in the case, which increased concern about lawlessness in the Italian capital, is expected to start next month.