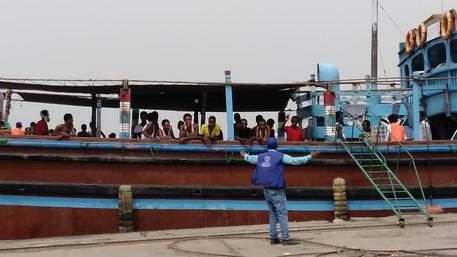 (ANSA) - Rome, July 17 - Libya let a woman and child aboard a drifting migrant boat die, NGO Proactiva Open Arms said Tuesday, publishing a photo of the two bodies in the sea, amid the wreckage of the boat. "The Libyan coast guard said it intercepted a boat with 158 people aboard supplying medical and humanitarian assistance," said NGO founder Oscar Camps. "But they didn't say they left two women and a child aboard and sank the ship because they didn't want to board the motor launches".
Interior ministry sources said that the NGO was peddling "fake news". The sources said that "in the next few hours" the ministry will publish "the version of third-party observers who deny the news that the Libyans failed to supply assistance".
Interior Minister Matteo Salvini said Tuesday he had never said people should be left in the sea to drown. "I challenge anyone to find a tweet in which I invite people to leave a human being in the sea," he said. "My goal is to save everyone, rescue everyone, treat everyone, nourish everyone, but also to stop everyone arriving in Italy". Salvini said he was "hanging tough" in the face of alleged "lies and insults" from migrant-rescue NGOs. He said "lies and insults from some foreign NGOs confirm that we're in the right: cutting departures and landings means reducing the deaths, and reducing the gains of those speculating on clandestine immigration." Salvini said "I'm hanging tough. #closedports and #openhearts".
The minister was responding to charges from NGO Proactiva Open Arms which said that the number of migrant drownings had risen since Salvini closed Italian ports to foreign NGOs.
Four out of 30 migrants aboard a vessel off the Sicilian island of Linosa drowned after jumping into the sea when they saw the Protector and Monte Sperone vessels of EU border agency Frontex and Italian finance police, the victims' relatives and friends confirmed on Tuesday.
Eleven crew members of the boat carrying the migrants were arrested on Tuesday and charged with their death as a consequence of another crime, prosecutors in Ragusa said. The Libyan coast guard on Monday stopped a migrant boat with 158 migrants aboard. These included 34 women and nine children, sources said.
The boat was intercepted off the city of Khoms, the coast guard said.
The migrants received humanitarian and medical assistance and were taken to a refugee camp at Khoms, the coast guard said.
The 450 migrants including many unaccompanied minors landed at Pozzallo in Sicily Monday.
France, Malta, Germany, Spain and Portugal have agreed to take 50 each and Ireland has said it will take 20, in the first such distribution of migrants.
Austria won't take in any of the 450 migrants, Chancellor Sebastian Kurz told Premier Giuseppe Conte Tuesday according to the APA news agency. "Austria has since 2015 accepted over 150,000 asylum requests and, in relation to the size of its population, has sustained one of the biggest contributions to the EU's migrant policy," he said.
"Many other countries have accepted very few".
Austria, therefore, will not "take part in a further redistribution", Kurz said.
Carers are lacking due to the government's clampdown on migrants, the Sant'Egidio lay Catholic ecumenical community said Tuesday. "Carers have dropped because of the restrictions envisaged for immigrants and the halt to migrant flows," it said.
"I raised the question with Premier (Giuseppe), Conte," said community president Marco Impagliazzo.
Impagliazzo urged the government to issue 50,00 work visas for carers "at once" and warned that "the elderly are at risk".
Migrant arrivals in Spain have overtaken those in Italy, the International Organisation for Migration (IOM) told reporters on Tuesday. From the start of the year to July 15 some 18,106 landed on Spanish shores on the western Mediterranean route while 17,827 came to Italy on the central route from Libya, the IOM told the press. Spain's migrant emergency is meanwhile continuing with more than 892 people rescued at the weekend alone off Andalusian shores.
Some 1,433 migrants have drowned in the Mediterranean trying to reach a better life in Europe so far this year, the International Organisation for Migration said Tuesday. A total of 50,872 migrants and refugees reached Europe by sea from the start of the year until July 15, the IOM said.
The central Med route to Italy from Libya remains the most lethal with 1,104 victims since the start of the year, almost four times the number reported on the Spain route (294).
although the number or arrivals in both countries is almost identical.
Frontex said Tuesday there was an 87% drop in migrant arrivals to Italy in June compared to the same month last year. There were just 3,000 arrivals across the central Mediterranean from Libya this June, it said.
The western Med route has become the most active with 6,400 arrivals in Spain, a 166% rise on June 2017, Frontex said.
In general in the fist half of this year the number of irregular crossings to the EU, at 60,430, is almost half what it was in the same period last year.