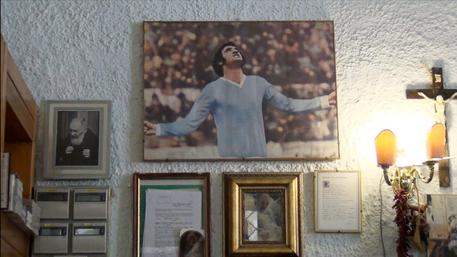 (ANSA) - Rome, May 25 - The owner of a traditional Rome eatery has said that Ivanka Trump mistook a picture of former Lazio great Giorgio Chinaglia for a saint during a visit this week.
Luigina Pantalone, who owns the 'Le Cave di Sant'Ignazio' restaurant with three siblings, said the US president's daughter asked "which saint is that?" referring to a picture of 'Long John' Chinaglia with his arms stretched open looking up to the sky. The picture was between a crucifix and an image of a real Catholic saint, Padre Pio. "We explained to her that it was not a saint but a great Lazio player," said Pantalone.
"It was an honour to serve such a figure in our restaurant".
Chinaglia's goals helped Lazio win their first Serie A title in the 1973 season.
The former Italy forward died in 2002 aged 65.