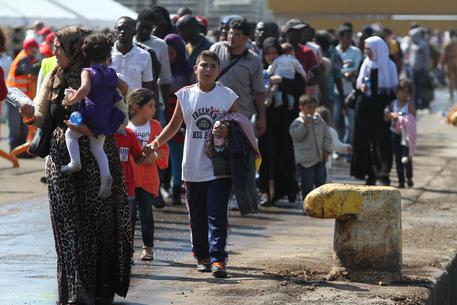 (see related story on migrant-boat disaster) (ANSA) - Palermo, April 20 - Police on Monday uncovered an alleged international migrant trafficking ring and arrested, among others, Ermias Ghermay and Medhane Yehdego Redae, considered by authorities to be among "the most important human traffickers operating on the so-called Libyan route".
Investigators said "enormous profits" were made by citizens of Eritrea, Ethiopia, the Ivory Coast, and Ghana who were involved in the criminal organization that allegedly smuggled and illegally settled thousands of their fellow citizens as immigrants in Italy.
Ghermay, an Ethiopian citizen, had been a fugitive from justice since July 2014, and investigators believe he was the organizer responsible for an October 2013 shipwreck in which at least 366 died at sea off the coast of Lampedusa.
Investigators said they uncovered a criminal organization operating out of the provinces of Palermo, Agrigento, Catania and Milan in cooperation with groups working in Africa and Maghreb.
This organization gave logistical support to migrants to help them escape from migrant shelters, establish illegal residence in Italy, and then further their journey onward to northern European countries such as Norway, Germany and Sweden, investigators said.
The investigation revealed the organization allegedly transacted business totalling hundreds of thousands of euros through illegal channels.