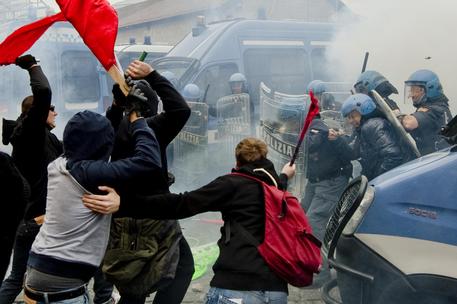 (ANSA) Naples, November 7 - Five police officers and a television cameraman were injured Friday when demonstrators clashed with police during a march protesting authorities' failure to renovate the Bagnoli former steelworks area in the bay of Naples.
Masked demonstrators threw firecrackers and baseball bats at police and threw up barricades made of street signs and rubbish carts during the protests against the so-called "Unblock Italy" government decree law which appointed a special commissar to oversee renewal of the Bagnoli area, a move that the opposition 5 Star Movement MP Roberto Fico claimed would mean property speculators being given free rein.
"We are preparing an appeal to the Regional TAR court against the Unblock Italy," said Fico, "if necessary we will physically prevent people getting their hands on Bagnoli".
"We don't accept that Rome names a commissar that will create new building speculation".
Naples Mayor Luigi de Magistris announced recently he wanted to remove his signature from a protocol agreement signed in August in the presence of Premier Matteo Renzi supporting the Unblock Italy scheme.
Demonstrators included representatives of the Cobas radical trade unions and student protest organisations as well as marchers who bussed into Naples from other cities in Campania.