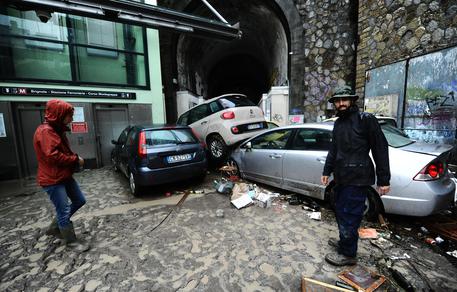 (ANSA) - Genoa, October 10 - Genoa was in chaos Friday after torrential rain caused rivers and streams to burst their banks in the northwestern Italian city in the night, killing one person. Flash floods washed away cars, caused power blackouts and left large areas of the historic port city covered in a thick layer of mud. The body of Antonio Campanella, a 57-year-old nurse, was found in the district of Brignole, where the river Bisagno had spilled over its banks. The city's prosecutor opened an investigation into possible manslaughter in the death.
Mayor Marco Doria acknowledged that Genoa authorities failed to alert residents to the danger.
"I will limit myself to one fact: the alert was not given," said Doria, adding he would ask regional authorities to declare a state of emergency in Genoa.
Some 50 Red Cross volunteers helped to man water pumps, distribute blankets to people forced from their homes, and joined in searches for residents who were not accounted for.
Schools and markets in the city were closed and the local council asked people to avoid using cars as much as possible, while completely closing traffic in some areas.
Four people were arrested for robbing two city shops hit by flooding and numerous cases of looting in homes and businesses were reported in the early morning hours of Friday.
In only 12 hours, total rainfall reached 262 mm, or more than 10 inches, Doria said early Friday afternoon. "We are in a full-blown emergency," Raffaella Paita, Liguria's regional councilor in charge of civil protection, said Friday. Regional environmental agency ARPAL described the situation as "critical", with more heavy rain expected later on Friday as what were described as storm "supercells" formed over the sea off the coastal city.
The agency defended itself against complaints it did not issue severe weather warnings in time, by saying that its data had not predicted such a deluge.
Weather forecasting has become "highly unpredictable" as climate change has driven a huge rise of more than 900% in the number of extreme weather events in the past 20 years, said climatologist Giampiero Maracchi of the University of Florence.
There was anger among some local residents over the failure by authorities to sound the alarm beforehand, especially since the city has a recent history of flood disasters, particularly a 2011 crisis when the Fereggiano river burst its banks, killing six people including two children.
Angry residents in a flood-stricken neighbourhood near the Fereggiano attacked municipal police Friday, shouting insults as the officers arrived to check water levels.
Landslides were reported in the region around the city and a train heading from Genoa to Turin was derailed by a mudslide amid the massive flooding.
The driver was hurt but all 150 passengers were reported to be in good condition, officials said.
Rail traffic between Genoa, Turin, and Milan would be delayed for some time because of the slide and subsequent damage, they said.
Meanwhile, the national cultural heritage ministry said it was sending in a crisis unit to ensure important sites, including the State Archives in Genoa, were not damaged.
Flooding in the area led to the closure Friday of the Roman amphitheatre in Genoa's Piazza delle Erbe.