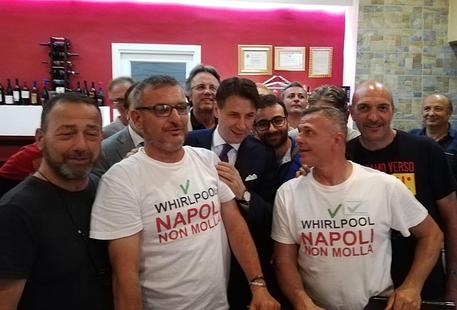 (ANSA) - Naples, June 18 - The government will meet the owners of Whirlpool on June 21, Premier Giuseppe Conte said Tuesday.
Conte hailed the hard work of Industry Minister Luigi Di Maio in the case, saying the ministers would meet the Whirlpool owners for the government.
Whirlpool on Wednesday confirmed that it does not intend to close or reconvert its Naples plant and is thus open to discussing the continuation of its activities there, according to sources at the labour and industry ministry.
The day's meeting ended after less than an hour of discussion.
Deputy Premier and Labour and Industry Minister Luigi Di Maio said that the announcement was the "precondition to restart dialogue. I take it for granted that from Monday there will be solutions that begin from the previous bases".
He added, in speaking to workers concerned that they will lose their jobs, to "stay strong and don't give up. I am with you. On Monday we will speak to the company to understand what solutions they will bring to us." The minister had on Tuesday said that he was scrapping State incentives granted to Whirlpool after the multinational decided to reconvert and sell on its factory in Naples.
"Whirlpool has not respected the pacts and it has taken back its word, saying it wants to close the Naples plant," 5-Star Movement (M5S) leader Di Maio told RTL radio.
He said he was about to sign "a ministerial directive revoking all the incentives. They have had around 50 million euros since 2014.
"If you come to Italy and take State money, you can't then go off and close the plants with an attitude that breaches the pacts".
Whirlpool hit back at Di Maio Tuesday saying it had never reneged on a deal, that the Naples site would not be "closed" and that it was "committed to finding a solution that guarantees the industrial continuity and the maximum employment levels of the site".