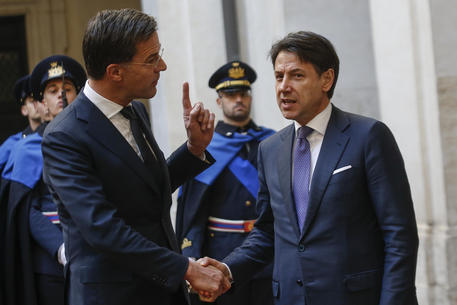 (ANSA) - Rome, January 15 - Premier Giuseppe Conte said Wednesday "Italy has been focused some time on making sure the (Libyan) crisis is heading for a political solution, we share a strong joint commitment to promote a sustainable political solution under the aegis of the United Nations." Conte was speaking after talks with Netherlands Prime Minister Mark Rutte.
He said "Italy's approach towards the Libyan crisis is one of the subjects touched on. With the approach of the Berlin conference, our position is clear and coherent: there is no space for a military solution that would exacerbate the suffering and instability of the region".
Earlier on Wednesday, Foreign Minister Luigi Di Maio said Italy has stigmatised outside interference in Libya.
There are no military shortcuts in the Mediterranean region, Di Maio said. "The broader Mediterranean is seeing a particularly turbulent phase above all in Libya, Iran and Iraq," Di Maio told the Senate. "Widespread instability closely touches national interests.
"The more Italy can be united and compact the more it will succeed in fielding an effective political action. "In the Mediterranean there are no military shortcuts, they do not produce sustainable solutions. Di Maio added that Italy had "stigmatized" outside interference in Libya, which had turned into a proxy war. He called for a European mission against this interference.
Di Maio said Sunday's Libya conference in Berlin had been set up "also thanks to us".