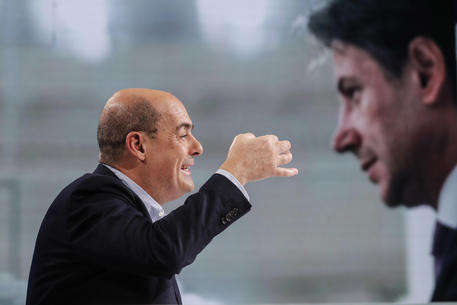 (ANSA) - Rieti, January 14 - Ruling centre-left Democratic Party (PD) leader Nicola Zingaretti told a party retreat near Rieti Tuesday that he was proposing a five-point strategic plan in view of a government 'verification' after regional elections in Emilia Romagna and Calabria at the end of the month.
"We will propose to the government a fully fledged strategic plan for Italy: five political objectives with concrete measures to be adopted," he said at the party huddle at Contigliano.
The points are: a green revolution to boost growth; a "simple Italy" to cut red tape in favour of businesses and citizens; an 'Equity Act' for wage parity between men and women and a north-south balance; increased spending for education; and a plan for health care and health assistance.
Zingaretti said the PD was also in favour of boosting the powers of the government in an electoral reform now being discussed.
"We must evaluate the strengthening of government powers," he said.
"We must not be afraid.
"We must field proposals opening talks with the other (government parties".
A 'verifica', or assessment of the status and health of the government coalition, is scheduled after the Emilia Romagna and Calabria elections, both taking place on January 26.
It was called to allay constant bickering over policies including budget issues and a reform of the statute of limitations.