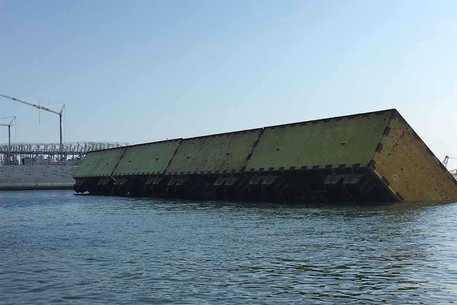 (ANSA) - Rieti, January 14 - The first real test of Venice's MOSE flood barriers went well Monday night and the system may be used in future emergencies in the lagoon city, Transport and Infrastructure Minister Paola De Micheli said Tuesday.
"Last night the first test of MOSE went OK, and if the emergency re-presents itself we will be able to raise the barriers" to fight 'acqua alta' flooding, she said.
Last month another key test in raising the barriers of the Venice MOSE anti-flood system also went well with a problem with vibrations resolved, the Consorzio Venezia Nuova consortium said.
Testing has gone up a gear after a disastrous flood on November 12 that killed two people and left the lagoon city on its knees.
The MOSE barriers were raised Monday night at the mouths of the port of Malamocco.
Even in conditions of moving tides, the consortium said, the barrier showed "clear stability".
As for the problems of vibrations found in an October 24 test, the latest test showed that "the interventions carried out and the modification of the procedures have solved the problems".
MOSE testing will get into full swing next year, the consortium said shortly after the dramatic acqua alta (high water) of November 12.
According to the latest schedule, the long-delayed system will be ready for use by the end of 2021.
Experimental raising of the barriers is already scheduled for the whole of 2020, it said, at a rate of one every 45 days.
There has been controversy over a failure to ready the MOSE project in time for the 187 cm tide that wrecked the lagoon city and killed two people.
The government has named former state property agency Demanio chief Elisabetta Spitz as new extraordinary commissioner for the MOSE project.
The MOSE system must be finished despite its being already obsolete, Foreign Minister and anti-establishment 5-Star Movement (M5S) leader Luigi Di Maio has said.
Projects like MOSE, which are currently due to be up and running in 2021, were "born old and stuffed with kickbacks and corruption but now, although it isn't the best possible solution, it must be completed as soon as possible to protect Venice immediately", he said.
"We won't pretend not to see where the blame lies," he said.
In September the updated 2018 balance sheet of the consortium building MOSE said the flood barriers will be handed over to the city council at the end of 2021 to protect the lagoon city from acqua alta or high water levels such as the 187 cm tide that hit Monday, the highest in 50 years.
The innovative and complex system of barriers, which cost 74 million euros in 2018 alone, will be completed at the end of June 2020, ushering in the final phase of testing.
Launched in 2003 and originally slated for completion in 2016, the MOSE project to build a system of retractable dikes has been at the centre of a slew of corruption scandals.
MOSE stands for MOdulo Sperimentale Elettromeccanico, or Experimental Electromechanical Module, and echoes Moses of parting the Red Sea fame.
The 5.5 billion euro (up by 1.3 billion form the first estimate) project is intended to protect the city of Venice and the Venetian Lagoon from flooding.
The project is an integrated system consisting of rows of mobile gates installed at the Lido, Malamocco, and Chioggia inlets that are able to isolate the Venetian Lagoon temporarily from the Adriatic Sea during acqua alta high tides.
Together with other measures, such as coastal reinforcement, the raising of quaysides, and the paving and improvement of the lagoon, MOSE is designed to protect Venice and the lagoon from tides of up to 3 metres (9.8 ft).
The Consorzio Venezia Nuova is responsible for the work on behalf of the Ministry of Infrastructure and Transport - Venice Water Authority.
Construction began simultaneously in 2003 at all three lagoon inlets, and as of June 2013, more than 85% of the project had been completed.