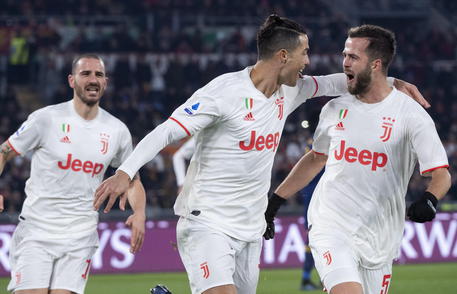 (ANSA) - Rome, January 13 - Juventus clinched the purely symbolic title of 'winter champions' that goes to the side that leads Serie A at the season's halfway mark thanks to Sunday's 2-1 win at AS Roma.
The Turin giants, who are aiming for a ninth consecutive scudetto, went two up in the first 10 minutes thanks to a goal by Merih Demiral and a Cristiano Ronaldo penalty.
Demiral came off injured later in the match as did Roma's promising young midfielder Nicolo Zaniolo, who suffered a cruciate-ligament knee injury.
Diego Perotti scored a spot-kick for the hosts in the second half. Juve have 48 points from 19 games, two more than Inter, who were held 1-1 at home by Atalanta on Saturday.
Third-placed Lazio are four points further back with a game in hand after beating Napoli 1-0.
Atalanta and Roma, who both have 35 points, are fourth and fifth respectively.