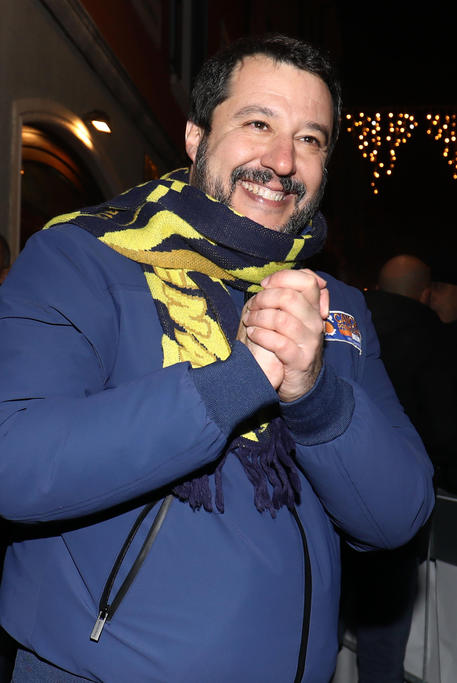 (ANSA) - Catanzaro, January 10 - League leader Matteo Salvini said Friday "we are thinking of a national mobilisation" to defend him in the alleged kidnapping of migrants aboard the Gregoretti ship last summer.
"That I should risk a trial for kidnapping for having defended the borders, security and honour of the country is unworthy of a civilised country," he said on the stump for Calabrian regional elections on January 26.
Earlier this month Salvini's lawyers presented a written deposition to the Senate's immunity panel defending his conduct when he was interior minister regarding the case of the Gregoretti Coast Guard ship.
The Catania court of ministers has requested parliament give it the OK to proceed against Salvini for allegedly abusing his power by failing to give the ok for more than 100 rescued migrants to disembark from the ship for several days during a long standoff in July.
The defensive deposition said that Salvini acted "in the interests of Italy" and said that the whole government, including Premier Giuseppe Conte's office, was involved in the decision.
The case was one of several standoffs Salvini was engaged in when he was interior minister and deputy premier in Conte's first government as he sought to apply his policy of closing Italy's ports to migrants-rescue vessels.
Last year, the League's former alliance partners, the 5-Star Movement (M5S), voted to reject a request to proceed against Salvini in a similar case, regarding the Diciotti Coast Guard ship in August 2018.
But M5S leader and Foreign Minister Luigi Di Maio has said that this case was different as the Diciotti "was a decision made by the (whole) government while the Gregoretti was propaganda".
Salvini pulled the plug on Premier Giuseppe Conte's first government last August, a move which led the M5S to form a new executive with the centre-left Democratic Party (PD) and other groups.
The Senate's immunity panel will vote on the case on January 20.