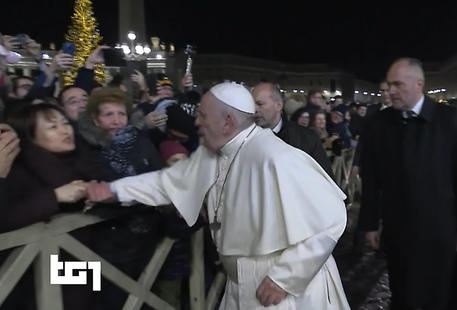 (ANSA) - Vatican City, January 2 - Pope Francis has apologized for slapping a pilgrim's hands in St Peter's Square after she grabbed the pontiff's hand and yanked him back, causing him to temporarily lose his balance on Tuesday night.
"Many times we lose our patience", the pope said in his first Angelus of the year on Wednesday.
"I do too and I apologize for yesterday's bad example", he said.
The episode was captured in a video that went viral on the internet and social media.
In the video, Francis is seen reaching out to shake the hands of children before a woman in the crowd of pilgrims grabs his hand and yanks him back, making him temporarily lose his balance.
An upset pontiff is then seen slapping the woman's hands twice to free himself before angrily walking away.