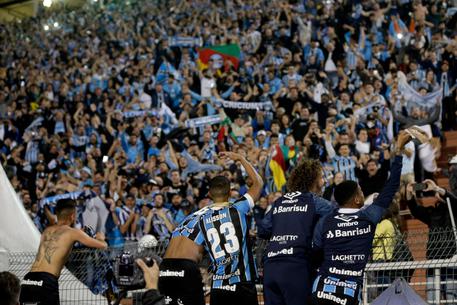 (ANSA) - Sao Paulo - The use of face-detection technology has been taken up at several tournaments, such as the 2019 Copa América, in order to prevent clashes between fans at soccer stadiums. That tournament was the first sporting event in Brazil to use this type of system and the aim was to make sure well-known hooligans and wanted people were kept away from the football games.
The technology enabled the police to detain three Argentine citizens with criminal records for violent conduct at the 'Arena do Grêmio' in Porto Alegre.
Furthermore, Wilson Witzel, the governor of the State of Rio de Janeiro, has announced that face detection is likely to be used for the 2020 Copa Libertadores final at the Maracanà Stadium. This type of solution has also been adopted outside Brazil, in places such as Denmark, where one of the country's top teams, Brondby, was the first club in the world to introduce face detection at its ground, the nation's second biggest. In Britain, Manchester City has announced a pilot project to introduce this system at its ground while the same technology was used in Egypt for Africa Cup of Nations matches this year. In Italy, Udinese are considering using face detection at the Stadio Friuli, which is also known as the Dacia Arena.
"The sector is hot," Security Care Chief Executive Edvaldo Veiga told ANSA in an interview.
"This technology is very important because it reduces the chances of fraud and other offences. "At a sporting event, for example, it can be used to identify people who should not be there".
According to a report entitled Security in Stadiums and prepared by Fortune - Business Inside, investment in protection systems in sporting arenas reached 6.2 million dollars in 2017.
According to sector projections, this figure could reach or surpass the 16-million-dollars mark by 2025.
Jung Park, the chief executive and founder of InovaMind, told ANSA that face detection can be used in various sectors of a stadium.
"There are a multitude of possibilities," he said.
"It can be used at the entrance for ticket sales and fan access. Spectators want to be able to feel safe at a soccer stadium". His firm presented an artificial-intelligence solution for immediate body and face detection at the Exposec fair, which was run by Cipa Fiera Milano in May in Sao Paulo.
This issue also looks set to be on the agenda when the event returns April 14-16, 2020. Park also stressed that these face-detection systems significantly strengthen the ability to combat illegal conduct, as this technology makes it possible to identify a person in a crowd "within milliseconds", in order to prevent violent fans who have been banned from stadiums being able to return to sporting facilities.