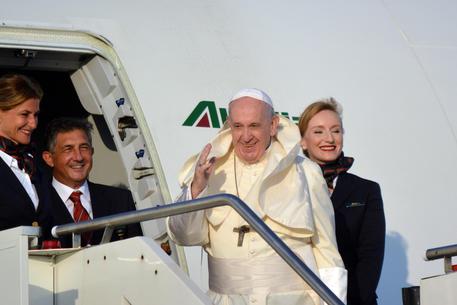 (ANSA) - Vatican City, September 4 - Pope Francis left Rome Wednesday for a seven-day African trip that will take him to Mozambique, Madagascar and Mauritius.
The Pope left Rome on Wednesday morning and will arrive in Maputo, Mozambique, in the evening, where he will be officially welcomed. He will spend Thursday and Friday in Maputo.
On Friday afternoon, he will fly to Antananarivo, Madagascar, where he will stay until Sunday evening.
Monday morning, Pope Francis will travel to Port Louis, Mauritius, for the conclusion of his Apostolic Journey. He will return to Rome on Tuesday.
It is the 31st trip of his pontificate.
Pope Francis on Tuesday released a video message for the people of Mauritius, thanking them for praying and preparing his 9 September Apostolic Visit, Vatican News said.
Pope Francis has dedicated the 31st Apostolic Journey of his pontificate to Africa. From 4 to 10 September, he will be travelling to Mozambique, Madagascar, and Mauritius.
He will make a day-long visit to Mauritius on 9 September, before flying back to Antananarivo, Madagascar, from where he will return to Rome the following day.
In his video message released on Tuesday, Pope Francis says it will be a joy for him to proclaim the Gospel among the people of Mauritius, "who have distinguished themselves for having been formed by the coming together of different ethnicities".
He says this allows them to "benefit from the richness of a variety of cultural and religious traditions." "The Catholic Church, from its beginnings, is sent to all peoples, and speaks all of the world's languages," he says, "But the language of the Gospel - as you know - is love." The Pope also prays that the Lord will allow him to proclaim the Gospel to the people of Mauritius, "in such a way that all may understand and receive it." Finally, the Holy Father concludes his message asking everyone to pray for him and for his Apostolic Journey.