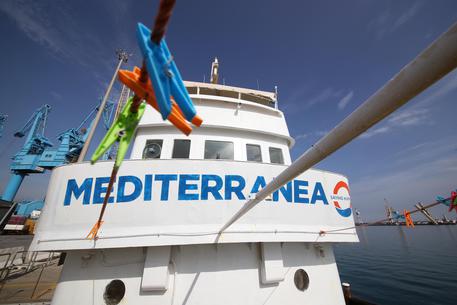 (ANSA) - Rome, August 28 - Outgoing interior minister Matteo Salvini on Wednesday signed an order banning the Mare Jonio migrant rescue ship from entering Italian waters with its 100 rescued migrants. The order bans the Mare Jonio from entering, transiting or stopping in Italian waters, according to his closed ports policy for NGO rescue ships.
Mediterranea Saving Humans, the Italian NGO running the ship, said the Italian coast guard had asked Italian authorities for a safe port for the vessel.
Mediterranea Saving Humans said earlier on its request for instructions regarding the rescue of 98 migrants earlier in the morning by its Mare Ionio ship, that the Italian sea rescue coordination center had responded ''as always'' to speak to the Libyan authorities.
The NGO replied on its Facebook page that they could not speak to the forces of a country in a civil war, where there is torture and inhumane treatment, on the future of people rescued and now on an Italian-flagged ship whose safety had thus become their responsibility. The NGO added that they had reiterated their request to the Italian authorities for instructions that are compatible with the international Law of the Sea and human rights laws.
The Mare Jonio on Wednesday morning completed the rescue of the 98 people from a dinghy that had been drifting off Libya. Among those rescued are 26 women, at least 8 of whom are pregnant, 22 children under age 10 and at least 6 other minors.