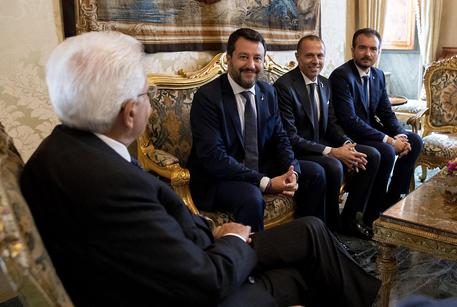 (ANSA) - Rome, August 28 - Nationalist League leader Matteo Salvini said after government crisis consultations with President Sergio Mattarella Wednesday that the likely upcoming government between his former partner the anti-establishment 5-Star Movement (M5S) and the centre-left Democratic Party (PD) filled the League with "dismay" and would be a reincarnation of the 2011-12 technocratic government of Mario Monti.
"Mattarella must put an end to this indecent spectacle", he said.
Salvini said "according to the ritual we were rapid, precise, direct, honest to the hilt with President Mattarella to whom we expressed the dismay not of the League but of millions of Italians with regard to the theatrics of the war for posts taking place for days" with the horse trading by the M5S and PD delegations.
Speaking of outgoing premier Giuseppe Conte, tipped to head a second administration, Salvini said "there is a premier at the indication of Paris, Berlin, Brussels, a Monti #2.
"Some people were bothered by a government that was restoring pride, sovereignty and a future to Italian families".
Salvini said that "60 million Italians are being held hostage by 100 MPs".
"Wouldn't it be wiser and more honest and decisive to let Italians vote and for five years have a solid, stable and coherent majority?", he asked.
"The government that is about to be born will be weak, and desired in Brussels and Berlin. Mattarella asked for a government with a long prospect: tell me seriously, someone, if an M5S and PD government would have long prospects.
"It's would be a long agony"