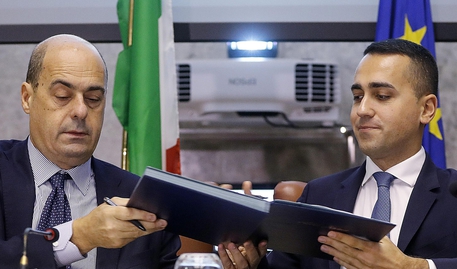 (ANSA) - Rome, August 28 - The anti-establishment 5-Star Movement (M5S) and the centre-left Democratic Party (PD) agreed Wednesday on outgoing and caretaker premier Giuseppe Conte heading up a new M5S-PD government - and Conte was therefore summoned by President Sergio Mattarella to the presidential palace at 9:30 Thursday to be given a mandate as premier-designate to formally find support for a new government.
M5S leader Luigi Di Maio said talks must now focus on the government programme, which PD leader Nicola Zingaretti said would feature fairer and greener policies.
Di Maio's insistence on keeping the deputy premiership and the M5S's plan to put the government to a vote on its online Rousseau platform are still controversial.
The Pd said the M5S could not have both the premiership, in Conte, and the deputy premiership.
Di Maio said after government crisis consultations with Mattarella that there was a deal with the PD for Conte to take up the reins again at the head of a new M5S-PD executive.
He said that the M5S would not "duck its commitments".
Di Maio said "we feel guaranteed" by Conte "on the policies we want to implement".
He said that left and right were "outdated" categories and the M5S was "post-ideological".
On the new government, Di Maio said that programmes would come first, "ahead of names" for the various posts.
He said there had been "polemics" on his insistence on remaining deputy premier but stressed that former partner the nationalist League party had offered him the premiership in exchange for a renewed government pact.
Di Maio said Us President Donald Trump's support for Conte, voiced Tuesday, showed that "the path is the right one".
He said it had been thanks to him that Conte, a professional lawyer and academic with no political experience, had become premier at the head of the 14-month populist M5S-League government.
Earlier the PD said yes to a government with the M5S under outgoing premier Conte, the so-called 'Conte #2', that would be a "new challenge" and usher in fairer, greener and more redistributive policies.
PD leader Nicola Zingaretti said after consultations with Mattarella that the PD had agreed to the M5S naming lawyer Conte as next premier.
Zingaretti said that the PD thought Italy needed a government that would mark "a turning point and discontinuity" with the last populist government.
He said that the new government would not take up the baton from the previous 5-Star-League administration, and would start a "fresh challenge".
The new government would hopefully usher in a "new season, civil, social and political".
He said the economic recipe would be "redistributive and green".
"We have the courage to try," he said.