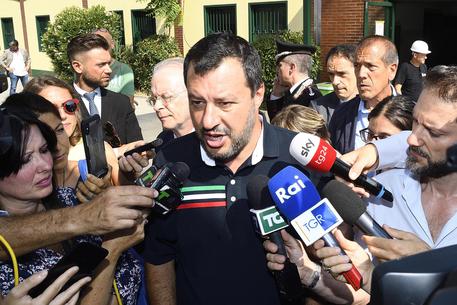 (ANSA) - Rome, August 1 - Deputy Premier and Interior Minister Matteo Salvini has come under fire for calling a woman a "nasty gypsy" (zingaraccia) after she said he should "get a bullet". He also warned the woman, who he said lived in an illegal Roma comp in Milan, that a "bulldozer" was on its way.
Salvini has pledged to shut down all of Italy's illegal Roma camps.
The comments caused uproar from the centre-left opposition.
But the minister hit back, saying he was astounded that his choice of words were what caused a furore and not the fact they he had got a "death threat". On Friday Noemi Di Segni, the president of the Union of Italian Jewish Communities (UCEI), criticised "the irresponsibility of those who, at the highest institutional levels, continue to blow on the fire of horrendous prejudices. "At the moment we are remembering Porajmos Romani genocide, when thousands of Roma and Sinti people were massacred in Nazi death camps," Di Segni said.
"It is something that still has a lot to teach us". Salvini was also criticised from some quarters for taking a swipe at the reporter who recorded his son taking ride with a police officer on one of the force's personal watercrafts (PWC) at the Milano Marittima resort on the Adriatic.
"Go and film children, you are specialised, seeing as you like it so much," Salvini said when the reporter from daily newspaper La Repubblica asked him as question at a news conference on Thursday.
"Children should be left out of political rows. Attack me but leave my son alone". Paola De Micheli, an member of the opposition centre-left Democratic Party (PD), said the League leader's comments were "extremely serious". Salvini has admitted to making "a dad's mistake" for getting the cop to give the boy a ride and sparking controversy about the use of State resources.