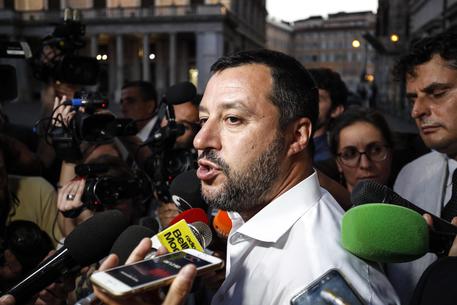 (ANSA) - Milan, July 11 - Milan prosecutors on Thursday opened a probe into alleged funds received by the far-right League party from Russia.
"We are carrying out investigations to understand if there are crimes or not," said Milan Chief Prosecutor Francesco Greco.
The League has denied reports in Italian newsweekly L'Espresso and on US news site Buzzfeed alleging the League received such funds.
Prosecutors Fabio De Pasquale, Gaetano Ruta and Sergio Spadaro have posited possible charges of international corruption in the case, judicial sources said.
League leader Matteo Salvini, the deputy premier and interior minister, on Thursday reiterated that "we have had zero Russian funds, it's clear that we are treading on someone's toes".
Sources for the League's government partner, the anti-establishment 5-Star Movement (M5S), said "we expect transparency on the funding probe".
Salvini said Wednesday he had never taken money from Russia and was ready to sue anyone who said he had.
Responding to the Buzzfeed report on an alleged meeting between men close to him and Kremlin officials, Salvini said "I have already sued for libel in the past, I'll do so again today, tomorrow and the day after tomorrow.
"I've never taken a rouble, a euro, a dollar or a litre of vodka in funding from Russia." Buzzfeed said that a member of Salvini's entourage, Gianluca Savoini, met on October 18 with another five people, two Italians and three Russians, in Moscow's historic Hotel Metropol.
An audio file allegedly shows them "negotiating the terms of a deal to send millions of dollars (reportedly 65 million), the fruit of profits from Russian oil, to Salvini's party, through a secret channel".
Savoini, president of the Lombardy-Russia association and the League's emissary in Moscow, told ANSA "I never received a rouble from any of the persons cited (in the report)".
He said "the rest of it is libellous innuendo, and in fact I'm at my lawyers".
Savoini repeated the denial Thursday and told several newspapers he did not recognise his voice on the alleged Buzzfeed tapes.
Centre-left opposition Democratic Party (PD) leader Nicola Zingaretti called on Salvini to "clear up" the allegations contained in the Buzzfeed report.
Two PD lawmakers, Senators Graziano Delrio and Andrea Marcucci, said they would move to set up a parliamentary commission of inquiry into the League's links with Russia.
The M5S said "the M5S works in the interests of the Italians, not other countries!" M5S leader Luigi Di Maio quipped "better Putin than the oilmen".
Salvini said after a report in Italian newsweekly L'Espresso earlier this year that the League did not get any illegal funding from Russia.
"Nothing has arrived nor will arrive at the League" as concerns illegal funding," he said.
"There is no money in Luxembourg, or the Caymans or in Switzerland. There are no roubles or yen or barrels of oil".
L'Espresso reported that the League had received millions of euros in funding from Russia.