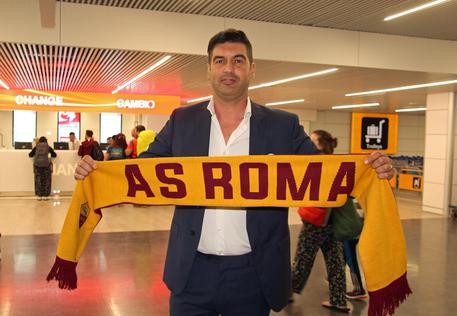 (ANSA) - Rome, June 24 - Paulo Fonseca said he was "happy, motivated and thrilled" as he arrived in Rome to take up the reins at AS Roma Monday.
The 46-year-old Portuguese has signed a two-year contract with an option for an additional season on top.
Fonseca replaces Claudio Ranieri, who led Roma until the end of last season after Eusebio Di Francesco was sacked in March.
Fonseca joins Roma from Shakhtar Donetsk, whom he led to the league and cup double in all of his three seasons with the Ukrainian club.
The former central defender made over 100 appearances in the Portuguese top flight during his playing career.
He cut his teeth as a coach with stints at Pacos Ferreira, Braga and Porto, developing an attractive attacking approach.
He won the Portuguese Cup with Braga in 2016 and the Portuguese Super Cup with Porto in 2013.
He is also a bit of a character.
He hit the headlines in 2017 when he dressed up as Zorro after Shakhtar beat Manchester City in a Champions League match.
He faces the challenge of bringing the best of a Roma side that has underperformed in recent years.
They finished sixth in Serie A in the season that has just ended, meaning they missed out on qualification for next season's Champions League and will have to make do with a campaign in the Europa League.
Fonseca also arrives hard on the heels of 'Tottigate', when club legend Francesco Totti quit as an executive accusing Chairman James Pallotta of wanting to 'de-Romanise' the team.