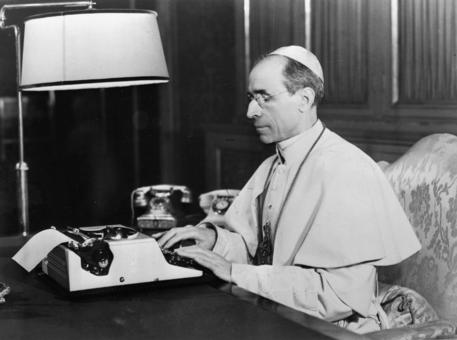 (ANSA) - Vatican City, March 4 - Pope Francis said Monday that the Vatican will open up its archives concerning the papacy of World War II-era pontiff Pius XII to researchers next year. Critics have claimed Pius XII did not do enough to denounce the Holocaust and the mass extermination of six million Jews.
The Vatican says Pius was working quietly behind the scenes through the war to protect Jews.
"The Church is not afraid of history," Francis said during an audience with officials from the Vatican Secret Archive.
"On the contrary, She loves it, and would like to love it more and better, as God does.
"So, with the same trust of my predecessors, I open and entrust to researchers this documentary heritage." Saturday was the 80th anniversary of Pius XII's election to the helm of the Catholic Church.
He was pope from 1939 to 1958.
The pope said the archives will be opened up in one year's time, on March 2, 2020.
"The hope is that now that clarity can be achieved on the role Pius XII had in the period of the Second World War," Ruth Dureghello, the president of Rome's Jewish Community, told ANSA.
"Unfortunately, we'll have to wait until 2020.
"Better late than never. It's good news from which we hope to obtain clarity about that period of history and the role of the pope".