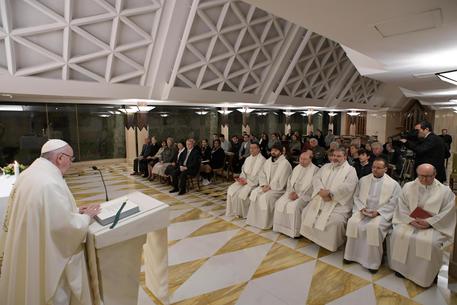 (ANSA) - Vatican City, January 18 - Pope Francis and other Christian leaders on Friday inaugurate the annual Week of Prayer for Christian Unity with the celebration of evening Vespers in the Basilica of St. Paul Outside the Walls, Vatican News reported.
The joint celebration that kicks off the Week of Prayer for Christian Unity is a powerful symbol of unity and of the recognition that Christian denominations are on the path to unity and getting closer in doctrine.
The Week of Prayer, traditionally observed from 18 to 25 January, unfolds this year on the theme "Justice, and only justice, you shall pursue" inspired by Deuteronomy.
Pope Francis looked ahead to the Week of Prayer during the Wednesday General Audience saying that "Again, this year we are called to pray so that all Christians may once again be a single family, according to God's will 'so that they may all be one'".
Participating in Vespers at St. Paul's Outside the Walls are also many faith-based groups that have made ecumenism an important part of their mission. Amongst them, the Ecumenical Institute of Bossey, with 29 students from across the Christian spectrum and from across the globe.