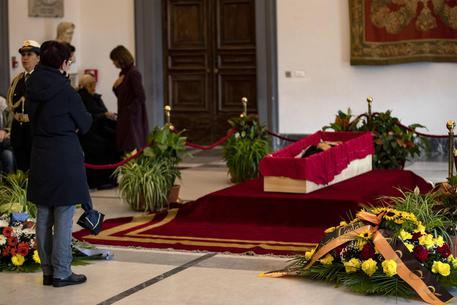 (ANSA) - Rome, November 27 - Great director Bernardo Bertolucci, who died Monday aged 77, lay in State at the Campidoglio in Rome on Tuesday.
Great cinematographer Vittorio Storaro, who worked on many of Bertolucci's masterpieces, was among the first to pay his respects, telling reporters "he was a brother and a maestro".
Next to the open coffin, with wreaths from Rome Mayor Virginia Raggi and Lazio Governor Nicola Zingaretti, friends and family stood by. "We are all poorer without him," said actress Stefania Sandrelli.
Zingaretti told reporters that the regional government would respond to requests from school heads and distribute Bertolucci's politically tinged masterpiece '1900' in schools across Lazio.
Cult horror director Dario Argento recalled that he and Bertolucci had worked together as screenwriters for Sergio Leone's western masterpiece Once Upon A Time In The West.
"I hadn't seen him for many years, but I think our friendship remained the same.
"He was the greatest director of his generation and perhaps one of the greatest there has ever been".
Oscar winner Giuseppe Tornatore, of Nuovo Cinema Paradiso fame, was asked about suggestions he might direct the film Bertolucci was preparing, and said "I don't think I'm up to grasping his stylistic speciality". Bertolucci had just finished the screenplay for the project, entitled The Echo Chamber. There will be a commemoration of Bertolucci on Thursday December 6 at the Teatro Argentina theatre, organisers said Tuesday.