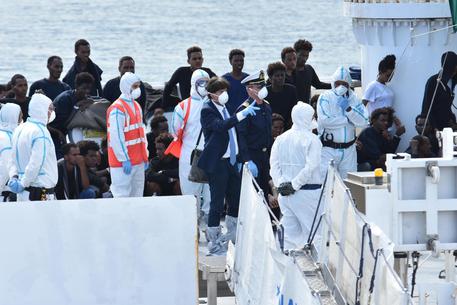 (ANSA) - Rome, August 23 - Interior Minister Matteo Salvini said Thursday all 148 migrants on board the coast guard ship Diciotti were illegals and that he responded to the Italian people as he pursued an Australian-style immigration policy.
"My objective is the Australian No Way," he said.
"They are all illegal immigrants on the Dicotti." "Italy is no longer Europe's refugee camp".
With my authorisation on the Diciotti, no one gets off".
Salvini said he responded to a mandate given by Italians in the March general election amid the row over the 148 migrants he is keeping aboard the Diciotti until the EU agrees to redistribute them.
"I respond to the mandate which the Italians gave me on March 4," said the leader of the anti-migrant Euroskeptic League party.
"They are asking me for more security".
Salvini has faced off against House Speaker Roberto Fico, of his ruling partner the anti-establishment 5-Star Movement (M5S), who says the migrants should be let off the boat and then EU agreement sought.
Salvini said Thursday Fico has done the "opposite" of the M5S in urging migrants aboard a coast guard ship to be allowed to land.
"I'm working very well with (M5S leader) Luigi Di Maio," said Salvini.
"Others have a lot of time to speak, I'm thinking of the House Speaker, who every so often says and does the exact opposite of other M5S exponents.
"It's a problem that they will resolve".
An Agrigento prosecutor is probing the case for alleged abduction.
The migrants have been aboard the Diciotti for a week and in Catania harbour for three days.
Some 29 migrant children were allowed to disembark on Wednesday night. Australia pushes back migrant boats from Asia to islands north of Australia.