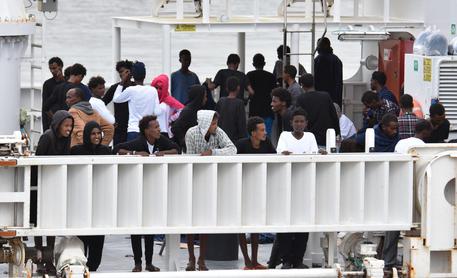 (ANSA) - Rome, August 21 - The Coast Guard's Diciotti ship carrying 177 rescued migrants docked at Catania shortly before midnight Monday but the migrants have been kept on the ship until the European Union agrees to their redistribution.
A spokesperson for the European Union migration commission said that contacts with member States were ongoing on the case. "The contacts are still ongoing, we are working to find a solution as soon as possible," said the spokesperson.
Interior Minister Matteo Salvini won't let any migrants off until the EU tells him they will go elsewhere, interior ministry sources have said. "The gallant men of the coast guard," Transport Minister Danilo Toninelli tweeted, "performed their duty saving human lives just 17 miles from Lampedusa".
He added: "Now Europe must swiftly play its part." Salvini won't let the migrants off the ship until he gets assurances from the EU that the migrants will be divvied up outside Italy, interior ministry sources said Monday. The sources stressed that answers from Europe were expected.
Until they are provided, they said, no one will be allowed to get off the ship.
On Monday the Italian foreign ministry "officially and formally" requested the intervention of the EU.
The Diciotti picked up the migrants last week after they were spotted in Maltese waters and Salvini has stressed they must be spread across the EU if the ship is to land in Italy.
Otherwise, he has said, they will be sent back to Libya.
Salvini said on Italian TV: "the ship may land in Italy, as long as the 177 migrants are distributed, in a spirit of solidarity by the EU, which is made up of 27 countries".
"Let them pay us this courtesy to play their part, given that we have taken in more than 700,000 people who came by sea".
He reiterated the intention of sending the 177 back to Libya unless the EU does its bit.
On Tuesday Salvini said the European Union is not making good on "pacts" on migrant reception.
Of the 450 migrants who landed at Pozzallo in Sicily in July, he said, "only France kept its vow, taking in 47 of the 50 promised".
The other countries - Germany, Portugal, Spain, Ireland e Malta - took in "zero", he said.
Salvini went on to urge the EU to investigate Malta which he said, according to migrants' accounts, was taking them towards Italy and then "abandoning them in conditions of danger".