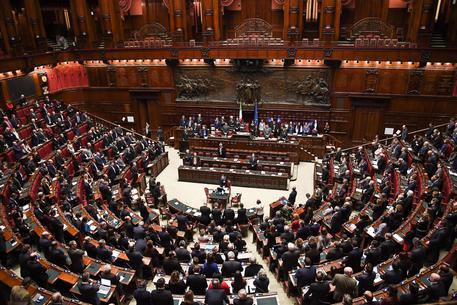 (ANSA) - Rome, March 4 - It will take at least a month, and perhaps a lot more, before Italy gets a new government after Sunday's general election, which failed to produce a clear winner.
The new Lower House MPs and Senators should be able to register in parliament March 8-9.
The first session of the new parliament should be on March 23 and its first job will be to elect the Speakers of the two chambers.
The regulations say that seniority dictates who will preside over proceedings in the Senate, so the honour should go to 93-year-old ex-president and Life Senator Giorgio Napolitano.
In the House, the job goes to the deputy Speaker from the previous parliament elected with most votes. The election of the Senate Speaker should not take more than three days.
If no one gets an absolute majority after three votes, there will be a run-off ballot between the two who came highest in the last round.
It could take longer in the House.
A two-thirds majority is needed to elect the new speaker in the first three rounds of voting, after which an absolute majority suffices. The lawmakers have until March 25 to state which parliamentary party they want to belong to and the parties have to elect their whips by March 27.
Once the speakers have been elected and the parliamentary parties formed, outgoing Premier Paolo Gentiloni will resign and President Sergio Mattarella will start consultations with them on the formation of new government late in March or early in April. After the consultations, Mattarella will decide what to do.
He can either give someone a full mandate to form a new government or an exploratory one if it is not clear whether it will be possible to form a majority in parliament.
The mandate is expected to go to 5-Star Movement (M5S) premier candidate Luigi Di Maio, which topped the polls, or League leader Matteo Salvini, whose party was the centre-right group that won most votes.
The M5S is the top individual party in the new parliament with over 32% of the vote, but the centre-right coalition as a whole got around 36%.
Neither has enough seats in parliament to form a majority.
So the premier designate may seek to win the support of the centre-left Democratic Party, which won under 20% of the vote.
Another possibility is the M5S and the League could in some way join forces. In the meantime, Gentiloni will stay in office for the day-to-day business of government.
If the premier designate thinks they have support for an executive, they will present a list of ministers to the president, the cabinet will be sworn in and the new government will be put to confidence votes in the House and Senate.
If the premier designate says they cannot form a government, there will be a new round of consultations and a new person will be given a mandate, possibly an impartial technician.