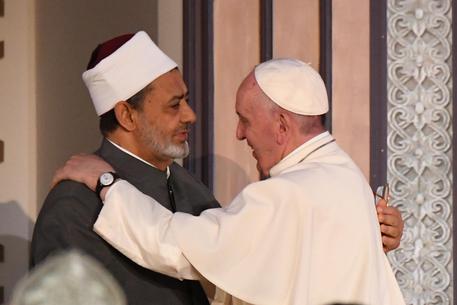 (ANSA) - Cairo, April 28 - Pope Francis called on leaders of all religions to unmask attempts to use faith to justify violence and hatred as he kicked off a two-day visit of Egypt on Friday. Francis was greeted by Egyptian Prime Minister Sherif Ismail and Ibrahim Isaac Sidrak, the Coptic Catholic Patriarch of Alexandria, as he got off the plane at Cairo airport.
The pope then travelled to the presidential palace to meet President Abdel Fattah el-Sisi. The pope also visited the Grand Imam of al-Azhar and the two leaders then addressed a peace conference at Cairo's Al-Azhar University. The Grand Imam of al-Azhar, currently Ahmed el-Tayeb, is one of Sunni Islam's most senior figures.
The pope started his address by saying "As-salamu alaykum" - Peace be with you.
"Violence is the negation of every authentic religious expression," the Argentine pontiff told the conference.
"As religious leaders, we are called to unmask the violence that masquerades as purported sanctity and is based more on the "absolutizing" of selfishness than on authentic openness to the Absolute. "We have an obligation to denounce violations of human dignity and human rights, to expose attempts to justify every form of hatred in the name of religion, and to condemn these attempts as idolatrous caricatures of God: Holy is his name, he is the God of peace, God salaam. "Peace alone, therefore, is holy and no act of violence can be perpetrated in the name of God, for it would profane his Name".
The pope has said he is travelling to Egypt as "a pilgrim of peace".
Dozens were killed earlier this month in two bomb attacks on two Coptic churches in Egypt on Palm Sunday.